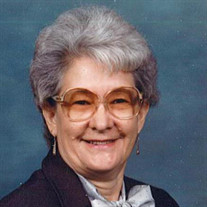 Funeral service for Verna Irene Stanton Keltner will be 10:00 a.m. Friday, April 29, 2022 at MMS-Payne Funeral Home Chapel in Claremore. Burial will follow at Dawes Cemetery in Chelsea. Visitation will be at the Funeral Home from 1-8 p.m. on Thursday, April 28; family will greet friends from 6-8 p.m. Verna's graduation and change of address was April 24, 2022. Verna was born September 30, 1929, to Arthur and Edith (Marvin) Stanton in Hunter, Oklahoma. Her young life was a hard life, moving from Hunter to Ponca City, then settling outside of Chelsea by age 9. She attended a little country school until the completion of 8th grade. To make the transition to high school, which was in town, she started working for Stuart and K.B. Milam. She was called their "foster daughter", working all through high school. That opened up a world to her that was priceless, with so many fond memories. She went on vacations with the family, helping care for Bill, Dian, John, and Phyllis. A bond was formed that exists to this day. She met a handsome young man named Kenneth Keltner, and was joined in marriage on December 16, 1950, in the Milam home. A few years later, they became proud parents; so proud that they only had one child. Verna worked hard as a housewife and mother. She also worked as a waittress at Flossie's, and at the jean factory in Chelsea. In 1963 the family moved to Wyoming. That was hard on her, leaving family and friends to live in a place that was snow covered 5-6 months out of the year. There she learned to knit and do many other crafts. She also learned to cook at a high altitude. Before moving to Wyoming, she was very active in the Order of Eastern Stars. Her dedication kept her very busy with decoration committees and special meetings for over ten years. She continued with her work upon their return to Oklahoma after Kenneth retired. When they moved to Wyoming, it was supposed to be for a few years, but it turned into 24 years. Verna was a fabulous seamstress who made items from wedding dresses to underpants, and everything in between. She won purple and blue ribbons on her knitted articles. She also did ceramics, and was great in the kitchen. Anything she set her mind to do, she became accomplished at it. She was 92 years old when she said her goodbyes to us and went to join Kenneth. She is preceded in death by her husband Kenneth, Yvonne Barnett her sisters Elva, Virginia, Ardith, and Joan, her brother Arlo; and her mother and father, Edith and Arthur. She is survived by her daughter Dian Keltner-Mills of Claremore, grandson James Orsborn and Jazmine Anderson and family of Broken Arrow, granddaughter Tawnya Wallace and Tommy of Claremore, eight great-grandchildren, and eight great-great-grandchildren. View and sign Verna's online memorial at www.mmsfuneralhomes.com.

Funeral service for Verna Irene Stanton Keltner will be 10:00 a.m. Friday, April 29, 2022 at MMS-Payne Funeral Home Chapel in Claremore. Burial will follow at Dawes Cemetery in Chelsea. Visitation will be at the Funeral Home from 1-8 p.m. on... View Obituary & Service Information

The family of Verna Irene Keltner created this Life Tributes page to make it easy to share your memories.

Funeral service for Verna Irene Stanton Keltner will be 10:00...

Send flowers to the Keltner family.