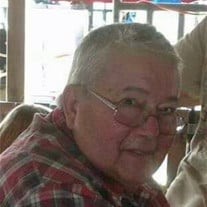 Rosary for Vincent Blakley will be held at 5:00 p.m. Tuesday, November 19, 2019, at the MMS-Payne Funeral Home Chapel. Visitation will follow until 7:00 p.m. Mass of Christian Burial will be held at 10:00 a.m. Wednesday, November 20, 2019 at St. Therese Catholic Church in Collinsville. Burial will follow at Oak Hill Cemetery in Oologah. Vincent Lee Blakley passed away on November 16, 2019, at the age of 76. The son of Priscilla Worden and Emmett Blakley was born April 5, 1943 at the Franklin Hospital in Claremore, Oklahoma. As a young boy he was raised in the Oologah area, where he attended school until transferring to Claremore as a sophomore so he could be in vocational agriculture as well as FFA. He then served as the State FFA Northeast Vice President 1961-1962. As a Junior and Senior, he had a talk show where he discussed various subjects. He was a member of the Claremore graduating class of 1961. Upon graduating, Vincent became reacquainted with Nancy Moore, a young girl he met in grade school at 4-H camp. They began dating, and married on November 22, 1963. They began their life in agriculture by purchasing his grandfather's farm. In their early years, they built the first and largest dry lot dairy operation in Oklahoma. Vincent was known to be a forward thinker and was always willing to listen to new ideas. He was a long time member of the Rogers County Fair Board. Vincent, along with a dear friend Glen Spafford, were founders of the Rogers County Young Stockman’s 4-H Club in the 1960s, which is still a club that meets today. In 1989, Vincent and others created the Oklahoma Club Calf Association, a youth organization that over the years has provided awards, scholarships, and opportunities to thousands of youth in the state of Oklahoma. Vincent was passionate about showing as a child, but became even more passionate when his children and grandchildren began showing. Every thing Vincent did revolved around the development of agriculture and youth. Throughout the years he has hosted agriculture field days and farm tours to everyone from grade schools to senior citizens from all over the country, and even foreign countries. In his later years, he received much joy from watching his grandchildren. They showed livestock, played sports, gave speeches, and participated in other FFA activities. He would travel all across the country just to see his grandchildren do what they loved, or to help anyone in need. He is preceded in death by his parents, Priscilla Worden, and Emmett Blakley.     Survivors include his wife, Nancy Blakley, son Lyle Blakley and wife Rae, daughter Lynda Runner and Husband Mike, son Lyndsey Blakley and wife Kali, extended family/ daughter Amber Spafford; grandchildren Rashele Blakley, Reighly Hendrix and Husband Bailey, Larahmy Blakley, Blake Runner, Bailie Runner, Neecey Blakley, Bram Blakley, Hunter Blakley, Lydia Blakley, and Dakota Hicks; sister Carolyn Jordan and husband Don; brother Mickey Jo Blakley and wife Kay; step-sisters, Darlene Brauner and Gaylyn Haynes and husband Tom, along with many nieces and nephews. View and sign Vincent's online memorial at www.mmsfuneralhomes.com.

The family of Vincent Lee Blakley created this Life Tributes page to make it easy to share your memories.

Send flowers to the Blakley family.