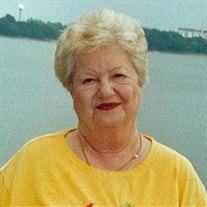 Graveside service for Wanda Elliott will be held 11:00 a.m. Thursday, September 19, 2019 at Woodlawn Cemetery in Claremore. Visitation will be held on Wednesday, September 18, 2019 from 1-8 p.m. at the MMS-Payne Funeral Home. Wanda Faye Elliott passed away September 13, 2019 in Claremore at the age of 76. The daughter of Melvin Roy and Opal (Casey) Payne was born October 6, 1942 in Claremore, Oklahoma. As a young girl she was raised on the family farm in the Harmony Starr area just east of Claremore. She attended Harmony Starr school before transferring to Sequoyah during her high school years. After finishing school Wanda met and married Harold Porterfield. To this marriage daughters, Terri and Stephanie were born. In the years to follow Wanda would raise her children as a single parent. She worked hard as a waitress at the Hammett House, before taking a job with the Rogers Country District Attorney's office. It was while at work a short time later that she met highway patrolman Ed Elliott. They would marry in August of 1978. That marriage would eventually move the couple to the Lawton area. Wanda would live there until Ed was killed on the job a short few years later. Wanting to be closer to her family Wanda moved back to Claremore. This led her to eventually meeting Rex Deal who would be her companion for the next 35 years. They made their home in Bartlesville. There Wanda would work for the Bellringer School and for Pricecutter before retiring in the early 1990's. She recently moved back to Claremore to be near her family. In her spare time Wanda had many hobbies and past times. She enjoyed things such as bingo, craft shows and watching the Oklahoma City Thunder. She enjoyed traveling to places such as roaring river to fish, and she loved Eureka Springs. Wanda also welcomed every chance she had to spend time with her mother Opal and their precious dog Otis. However her true enjoyment came from her family. She loved talking to them each day, either in person or on the phone. She is preceded in death by her parents, Melvin and Opal Payne, and husbands, Ed Elliott and Rex Deal. Survivors include her children Terri Young and husband Bret, and Stephanie Porterfield Bauer; grandchildren, Tim Landes, Angela Young, Heather Stratton and husband Dane, and Alex Bauer; great-grandchildren, Sam, Jaden, Camren, and Ava; siblings, Sherry Still and husband Marvin, and Rodney Payne and wife Julie; aunt, Mary Jo Bridwell; nieces, Cindy Hefner and Joslyn Collins; nephews, Scott Ray, Ryan Payne, and Matthew Payne, along with many other cousins and extended family. View and sign Wanda's online memorial at www.mmsfuneralhomes.com

The family of Wanda Faye Elliott created this Life Tributes page to make it easy to share your memories.

Graveside service for Wanda Elliott will be held 11:00 a.m. Thursday,...

Send flowers to the Elliott family.