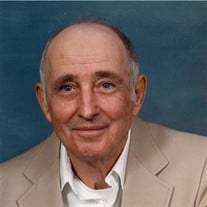 The service for Wayne Carl Freidline will be Tuesday, June 4, 2019 at 2:00 pm at Sequoyah Baptist Church, with burial following at the Oowala Cemetery. Wayne passed away Thursday, May 30, 2019. He was 89. Visitation will be Monday, June 3, from 1-8 pm, and with family from 6-8 pm at MMS-Payne Funeral Home. Wayne was born September 8th, 1929, in Caney, Kansas to George and Mary Freidline. He attended Caney Schools, then enlisted in the U. S. Army, where he served in the Korean War and was honorably discharged. He also attended Tulsa Welding and Kentucky Military Base Mechanics School. Wayne met and married the love of his life, Elma Jean Kelleyhan on July 16, 1954 in Bartlesville, then lived in Coffeyville, KS before moving to Claremore, where they have made their home ever since. This year they were married 65 years. He held many different jobs including plumbing, surveying with his brother-in-law in New Mexico, a mechanic at OMA, and working in the construction of Oologah and Keystone Dams, before working as a heavy equipment mechanic for Peabody Coal Company, where he retired from. Wayne could "fix" about anything, and often made various things including wooden trains and doll beds for the grandchildren. He had a great fondness for yellow sunflowers, the state flower of Kansas. Down through the years they were able to travel to many places including Memphis, Nashville, and Gatlinburg, TN, Niagara Falls, Yellowstone, and three trips to Hawaii, where Wayne went parasailing in 2016. Wayne and Elma Jean have been members at Sequoyah Baptist Church for many years, and he served as a greeter for 20 years. Surviving family members include his wife Elma Jean of the home; daughters Connie Bauer and husband Rod, and Kathey Rock and husband David; grandchildren Billy Ewton, Kristi Bittner and husband Mark, Bryan Rock, and Natalie Rock; great-grandchildren Noah Ewton and Kaitlyn Ainsworth, all of Claremore; sisters-in-law Bertha Freidline of Garnett, Kansas and Loretta Freidline of Caney, Kansas; Wayne was preceded in death by his parents and three brothers Dale, Keith, and Paul. Those who wish to honor Wayne with a memorial contribution may do so to Sequoyah Baptist Church, 16451 South Highway 66; Claremore, Oklahoma 74017.

The service for Wayne Carl Freidline will be Tuesday, June 4, 2019 at 2:00 pm at Sequoyah Baptist Church, with burial following at the Oowala Cemetery. Wayne passed away Thursday, May 30, 2019. He was 89. Visitation will be Monday, June... View Obituary & Service Information

The family of Wayne Carl Freidline created this Life Tributes page to make it easy to share your memories.

The service for Wayne Carl Freidline will be Tuesday, June 4,...

Send flowers to the Freidline family.