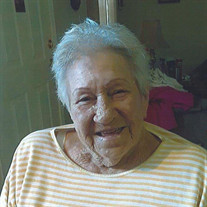 Service for Willia Mae Jones will be held 11:00 a.m., Friday, March 19, 2021 at the MMS-Payne Funeral Home Chapel. Willia Mae Jones passed away on Tuesday, March 16th, 2021 at the age of 77. The daughter of Lerskov and Georgia Gourd Chaney was born January 20th, 1944 in Claremore, Oklahoma. She would later attend Claremore schools. There she would become reacquainted with Chester Jones, a friend she met at the age of ten. They would eventually begin dating and marry on May 23, 1962. She and Chester settled out on the Kiska Ranch in Sequoyah. They would live there and begin raising their family. A few years later Chester took a job working as an investigator with the DA's office for Rogers, Mayes, and Craig Counties. At that time Willia Mae and Chester moved to Claremore. In the years following Willia Mae begin working. She worked at Boots Off, where she painted desk trays for the U.S. Government. Later she ran the concession stand at the bingo hall located at the old fairgrounds. In her spare time Willia Mae had a few things that she truly enjoyed. She loved working puzzle books, embroidery work and her morning coffee. However, it was her family that brought her the most joy. She loved being with her children, and was the best "Nana" around. The entire family recalled all the wonderful time spent with her, and how much they enjoyed her great cooking. She is preceded in death by her parents, Lerskov and Georgia Chaney; husband of 37 years, Chester Jones; daughter, Cheryl Jones-Temple, and brothers, Doyle, Douglas, and George Chaney and sister, Bernice Peterson. Survivors include her daughters, Patty Choate, and Cindy Jones; grandchildren, Ashley Cagle and husband Chris, Michael Jones, Andrew Choate and wife Courtney, David Choate and wife Jacque, Joshua Jones, and Jorden Evans; great-grandchildren, Bryton, Isaac, Makia, Isabella, Paizleyjo, Denton, Jack, Dakota, Adelyn and Logan; brother, Noland "Cotton" Chaney and sister, Wonda Oard. View and sign Willia Mae's online memorial at www.mmsfuneralhomes.com

The family of Willia Jones created this Life Tributes page to make it easy to share your memories.