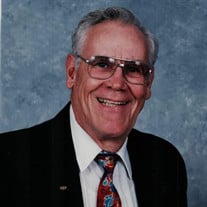 William, known as Leon by friends and family, passed from this life into the arms of Jesus on May 16, 2020, sixteen days prior to his 94th birthday. He was born June 1, 1926 in Collinsville, Tulsa County, OK, to James William Anderson and Martha Aphia Bell Anderson. He attended schools in Collinsville, Snarr, Sequoyah, Foyil, Oologah, and Chelsea. He moved to Chelsea in 1942 as a sophomore, and graduated from Chelsea High School in May, 1944. While a senior, he worked for Jack Rodriquez's auto salvage. After graduation he entered the Army in September, 1944. Leon had basic training at Camp Fannin in Tyler, TX. After Basic training and nine days at home, he was sent to Ft. Ord, CA, processing for overseas. On March 12, 1945 he boarded the ship General Blanchford (a troupe carrier) at San Francisco, CA, for the Philippines. After 31 days at sea the ship landed at Manila, on the same day that President Roosevelt died. He was assigned to the 149 regiment, 2nd Battalion, Headquarters Company, 38 Infantry Division. He served in two combat operations in the Philippines, where he helped liberate the watersheds east of Manila. In August 1945, while at army headquarters in Manila, Leon witnessed the arrival of the Japanese officers who came to initiate the peace process. At the end of the war he was assigned to the 86th division and sent to the island of Mindanao to aid the Philippine people. There he drove a truck hauling supplies, and later worked in the truck shop. After 17 months in the Philippines, Leon was sent home and discharged on September 12, 1946, in San Antonio, TX. He called it a "glorious day". Leon's dad saw him coming down the lane at home and said, "his steps were the longest he had ever seen". On December 25, 1947, Leon married a local girl, Laura Louann Snider. To this union were born three children, David Leon, Vicki Annette, and James Edwin. Leon worked for Leroy Nix's Pontiac for three years, then opened his own shop called Leon's Auto Service. In 1963 he started teaching Auto Mechanics, first at Foyil, then Vinita for three years, then at Northeast Vo Tech School, retiring in 1987 after 24 years. He and Louann operated a farm raising cattle. Leon received his Bachelor of Arts from Oklahoma State University in 1981, after several years of long nights and summer studies. He was proud of his exhaustive genealogy work that documented many generations of the Anderson, Snider, and Bell families. His work is documented in two published books and several non-published manuscripts. Leon was a member of the Chelsea Assembly of God Church. He served working with the youth as a Sunday School teacher, and also as a Deacon for many years. Leon is preceded in death by parents James W. (Bill) and Martha A. (Bell) Anderson, sister Audra Faye Anderson, and brother George Eugene Anderson. He is survived by his wife of 72 years, Laura Louann (Snider) Anderson, children David Anderson and wife Patsy, James Anderson and wife Beth, all of Chelsea, and Vicki Brochtrup and husband Joe of Austin, TX; grandchildren Ray Anderson and wife Chanda of Chelsea, Eric Anderson of Loveland, CO, Chandra Thompson and husband Miles of Johnstown, CO, Andrea Junker of Barcelona, Spain, Bryan Junker and wife Frances Saldivar of Rosenberg, TX, and Jennifer Lemieux and husband Andy, and Shanna Mathews and husband Andrew, all of Tulsa, OK; eleven great-grandchildren: Lane, Landon, and Niles Anderson, Joshua Tyler and Laura Anderson, Savannah and Aubrey Thompson, Hayleigh, Emaleigh, and Conner Casey, and Evie Mathews. Memorial service is pending.

William, known as Leon by friends and family, passed from this life into the arms of Jesus on May 16, 2020, sixteen days prior to his 94th birthday. He was born June 1, 1926 in Collinsville, Tulsa County, OK, to James William Anderson and... View Obituary & Service Information

The family of William Leon Anderson created this Life Tributes page to make it easy to share your memories.

William, known as Leon by friends and family, passed from this...

Send flowers to the Anderson family.