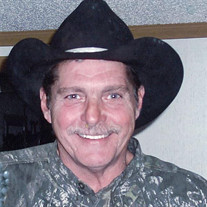 Service for William Ray "Bill" McGuire will be 11:00 a.m., Friday, August 30, 2019 at First Baptist Church, Verdigris, burial will follow at Wofford Cemetery. Friends may visit at the funeral home on Thursday, August 29 from 1pm-8pm, with family receiving visitors from 6pm-8pm. Bill passed away on Tuesday, August 27 at his home with family by his side. Born April 14, 1949 in Tulsa, Oklahoma to Elmer Lonzo and Margie Opal (Whitaker) McGuire, Bill attended school at Verdigris and Catoosa before moving to Warrensburg, Missouri his junior year. He graduated with the class of 1967. Bill was later inducted into the Warrensburg High School Basketball Hall of Fame for most rebounds. He enlisted in the Air Force on May 21, 1969 and served in Vietnam from December 1969 to December 1970. When he came back to the states he was stationed at England Air Force Base in Alexandria, Louisiana. While stationed in Alexandria, Bill met Deborah "Debo" Elizabeth Black and the couple later married on December 30, 1972. Following his honorable discharge, they moved to Oklahoma and this has been home since. Bill worked in the Aerospace industry, first at McDonnell Douglas/Boeing and later at American Airlines. He was well respected at both places by the men and women who worked for him and with him. Bill was a very hard worker and provided well for his family. He enjoyed surprising his wife and kids with gifts that could range from the simplest item to a jeep. He loved spending time with them and his many friends. He was one of the biggest OU fans around, making sure he never missed watching a game. Bill also was an avid deer hunter, he spent many hours in the woods on his dad's farm each year. The news and weather were always on his tv and being a farmer, he needed to know the latest forecast. Those family members that preceded Bill in death include his parents, Elmer and Margie McGuire; his brother Elmer Lonzo McGuire, Jr. and his sister Lynn Farmer. Those family who survive include his wife Debbie "Debo" McGuire of their home; his daughter Stacey McGuire and son Billy McGuire all of Claremore; his sisters Donna Michener and husband Gary also of Claremore and Kristy Daugherty and husband Sean of Owasso; and many nieces and nephews as well as great nieces and nephews.

Service for William Ray "Bill" McGuire will be 11:00 a.m., Friday, August 30, 2019 at First Baptist Church, Verdigris, burial will follow at Wofford Cemetery. Friends may visit at the funeral home on Thursday, August 29 from 1pm-8pm, with... View Obituary & Service Information

The family of William "Bill" Ray McGuire created this Life Tributes page to make it easy to share your memories.

Send flowers to the McGuire family.