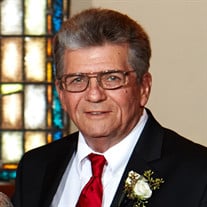 Service for Bill Duke will be 2:00 p.m., Wednesday, November 27, 2019 at MMS-Payne Funeral Home Chapel; burial will follow at Oakhaven Memorial Gardens. Friends may visit at the funeral home on Wednesday, November 27 from 12:00 p.m. until service time. William (Bill) Bennie Duke, Sr., age 76, passed away peacefully November 23, 2019 in Kansas City, Missouri. He was born September 25, 1943 in Vernon, Texas to Marion Henry and Dorothy Duke, both preceding him in death.He married the love of his life, Maxine Cole Duke, in Palmdale, California in November of 1961. Maxine preceded him in death in April 2019. Together they had three children, daughter Teresa Blevins, who preceded him in death, daughter Doreen (Dave) Bennett of Overland Park, Kansas, and son William (Bonnie) Bennie Duke, Jr, of Inola, Oklahoma. Bill took pride in serving his country from 1961 to 1964, driving a tank for the United States Army. He loved his country and flew the American flag with honor. He worked for over 25 years for McDonnell Douglas in Palmdale, California and Tulsa, Oklahoma, where he managed in the production control/inventory management department. He was a hard worker and a man of integrity, and received awards for perfect attendance year after year. He went on to do the same for ScriptPro of Mission, Kansas, where he retired in 2011. His very favorite pastime was watching westerns. He spent countless hours re-watching his favorites, and he tried hopelessly to indoctrinate anyone he could into this pursuit. His very favorite actor was John Wayne, and he owned many books and movies about this legendary hero of his. His next favorite pastime was supporting his local teams, the Chiefs and Royals, and never missed a televised game! Bill loved his entire family, where he was also known as “Dub”, and any moment he could spend with them he cherished. He and Maxine surrounded their children with their aunts and uncles and cousins as they were growing up to create a strong family bond that remains to this day. This was also kept alive through yearly family reunions. Bill absolutely loved the family reunions and never missed one; his spirit will live on through them for years to come. He is also survived by nine grandchildren: Dillon (Hayley) Bump of Tulsa, Oklahoma, William “Cody” (Emily) Bump of Loveland, Colorado, Heather (Matt) Keaton of Bartlesville, Oklahoma, Amber (Shawn) Collins of Bartlesville, Oklahoma, Elizabeth Blevins of Tulsa, Oklahoma, Austin Bump of Overland Park, Kansas, Sarah (Brad) Speer of Independence, Missouri, Joshua Duke of Inola, Oklahoma and Amanda Duke of Inola, Oklahoma. He loved and adored his eighteen great-grandchildren. He also leaves behind siblings Finley (Helen) Duke of Houston, Texas, Ray Duke of Jenks, Oklahoma, and Brenda (Vito) Bisceglia of Englewood, Florida and many cousins, nieces, nephews, and friends.

The family of William Bennie "Bill" Duke created this Life Tributes page to make it easy to share your memories.

Send flowers to the Duke family.