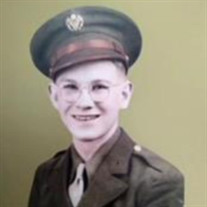 Funeral service for Ed Roughly will be held on Tuesday, July 27, 2021 at the First Baptist Church of Verdigris. Pastor Rogers Plemmens will officiate. Burial will follow at Hartford Memorial Park Cemetery in Hartford, Arkansas. William Edward Roughley was born September 16th, 1926 in Haskell, Oklahoma. He would spend the early years of his life there. At the age of nine, Ed and his family moved to Tulsa. There he would begin attending Lowell Elementary School, and later Central High School. With the outbreak of World War II Ed enlisted into the United States Army. He was eventually sent to the Pacific Theater where he participated in the liberation of the Philippians. There he earned a Bronze Starr. His military career would also include a stint in Panama and back in the United States serving at Ft. Knox, Kentucky. On November 1, 1948 Ed was honorably discharged from the U.S. Army. While Ed was stationed at Ft. Knox, he met Peggy Lloyd. The couple began dating, and married on October 2, 1948. In November of that same year, Ed and Peggy moved to Tulsa, Oklahoma. There Ed followed in his father’s footsteps and began working as a barber. A short time later, Ed and his family would move to California. There Ed began working for North American Rockwell. During his 16 years there, he worked on many projects including the Apollo 11 aircraft that went to the moon. He would follow that up several years of work at Hughes Aircraft working as a Process Engineer. He would officially retire in 1989. Ed moved to the Verdigris area in 1997 and became involved with the First Baptist Church. He was a member of the Elks, Lodge # 1230 for 45 years and the American Legion Post 141. Ed loved a play golf and enjoyed just about any type of sports. Other hobbies included gardening, boating, and camping. He was also a Scout Master. Those family members that survive include his sons Daniel Edward Roughley and wife Donna of Parris, California and David Lee Roughley and wife Lou Ann of Verdigris; grandchildren Angela Roughley - Starkey, Aaron Roughley, Holly Roughley, Laura Roughley, and Matthew Roughley; great grandchildren Bret Pusztai, Emily Starkey, Jacob Starkey, James Roughley, Wyatt Roughley, and Ruby Jewel Roughley; great great grandchildren Wyatt and Madalyn. Ed was preceded in death by his parents, wife Peggy Roughley, daughter Patricia Ann Dailey, son Paul Wesley Roughley granddaughters Teresa Dailey and Amber Dailey.

The family of William Edward Roughley created this Life Tributes page to make it easy to share your memories.

Funeral service for Ed Roughly will be held on Tuesday, July...

Send flowers to the Roughley family.