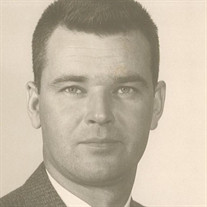 William R. “Bob” Simpson was born on September 20, 1930, in Chelsea, OK to George and Anne Simpson. He met his Heavenly Father on January 5, 2022. Bob graduated from Chelsea High School in 1948 and went to Oklahoma State University, where he majored in Advanced Studies in Animal Husbandry and was a member of Alpha Gamma Rho fraternity. He met Anita Streeter in the summer of ’51 at the Streeter Souvenir Shop. After a long courtship they married June 8, 1956, in Anita’s home on E 5th Street. He had a 40-year career with the government starting as a Park Ranger on the Outer Banks in North Carolina, then transferred to the Department of Agriculture, and finishing his career in the newly established Department of Energy. He and Anita had the privilege of living in six different states, building their family and a close network of friends. After retirement, they returned to Claremore where he was active in his church, umpired youth baseball games, spent many hours volunteering at the VA Hospital, while enjoying his hobbies of building balsa-wood model airplanes, driving for local dealerships, and visiting with friends and neighbors. He was preceded in death by his parents, sister, brother-in-law and niece, daughters Carol and Linda, and grandson Hugh Ghormley IV. Bob is survived by his wife Anita Simpson , daughter Jill, husband Hugh, children Seth and Riley Ghormley of Garland, TX; daughter Stacy, husband Stefano Crivellaro of Abano Terme, Italy; grandchildren Christina and Michael Glover of Houston, TX, great-grandson Alex Hernandez currently stationed in Germany, Hugh Ghormley V, and Jace Ghormley; nephew David Burnett, of Ponca City, OK; and his beloved cat Chester. Memorial services will be held Wednesday, January 12, 11:30 am, at First Baptist Church Claremore.

The family of William R. "Bob" Simpson created this Life Tributes page to make it easy to share your memories.

Send flowers to the Simpson family.