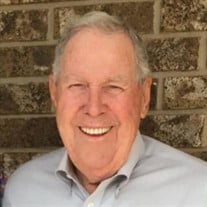 Memorial service for Winford Turner will be 11:00 a.m., Saturday, November 7, 2020 at Claremore First Baptist Church Chapel. Winford passed away on Tuesday, November 3, 2020.  He was 85. Born November 1, 1935, in Claremore, Oklahoma to Fred Turner and Bertha (Sumter) Vest, Winford received his education in Claremore. He later enlisted with the US Navy and proudly served his country. During his time in the Navy Winford met Beverly Hurlbut, and the rest is history. The couple married in Warrington, Florida on April 3, 1959. Tulsa was home for a time while he worked for Safeway Grocery Store, then Cushing became home. While there Winford worked for Safeway, Kerr-McGee, and Big Creek Rural Water. In 1978 the family moved to Claremore, and he opened a convenience store. He also worked at Heston for a time before obtaining a position with Centrilift working in production control and as a receiving supervisor, retiring in 2002. Winford loved spending time with his family, having a meal or just visiting. Holidays were most memorable, with him reading the Christmas Story from the Bible surrounded by his family. He loved spending time on his farm, Owalla Valley Charolais, tending his cattle, baling hay, or teaching his grandchildren and other young men about farming. He enjoyed spending time with his grandchildren and great-grandchildren driving in the pasture to see the cattle. He loved OU football, listening on the radio and watching the games on TV. Another passion of his was his church family and loving his Lord and Savior Jesus Christ. This kind and caring husband, father, grandfather and friend will be missed by all who knew him. Those family members that survive include his wife Beverly of their home in Claremore; his children Tammie Smith and husband James of Claremore, Michael Turner and wife Faith of Papua New Guinea, and Cindee Enix and husband Mark of Verdigris; his grandchildren Jason Dorsey and wife Leigh, Justin Dorsey, Kevin Turner, Chase Enix and wife Mara, Caitlyn Enix, and Daniel Turner and wife Moriah; his great- grandchildren Rain Dorsey, Macie Dorsey, and Kayson Cook; and his sister Ann Vest.  Winford was preceded in death by his parents, his grandparents George and Stella Sumter and his great-granddaughter Vivienne Grace Dorsey. Donations in memory of Winford can be made to the First Baptist Church Missions: Claremore First Baptist Church 107 East Will Rogers Blvd. Claremore, Ok 74017

The family of Winford Lee Turner created this Life Tributes page to make it easy to share your memories.

Send flowers to the Turner family.