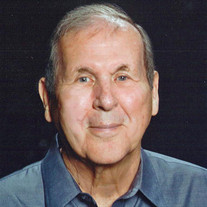 Alfred C. Posner, 82, passed away on Tuesday, March 5, 2019. There was a memorial service on Friday, March 8, at the First Presbyterian Church. He was born in Hillsboro, Missouri, to the late Alfred Rudolph and Melva Mable Posner. He attended the Missouri School of Mines (Metallurgy). He started at an entry-level position with the U.S. Army, Corps of Engineers in the St. Louis District. He was interested in engineering, but somehow ended up in real estate. He moved to the Kansas City District, and while there, was promoted to Assistant Chief of Real Estate, and then to the Tulsa District as Chief of Real Estate. The Skiatook Lake was one of his projects. His next move was to the South Atlantic Division in Atlanta, as Director. The Southeast United States, the Caribbean, Central America, and Southwest Asia were his areas of operation. He developed a program where the Real Estate Division would furnish employees overseas in the event of emergencies to acquire interest in real property for the U.S. Army. This program was put into effect during Operation Desert Storm. He had 16 employees in Saudi Arabia leasing expensive cold storage facilities and troop barracks. At one point of the war when the Kurds were stranded in Northern Iraq, he was required to travel over to find a way to get food to them. He retired in 1992 with 35 years of service. After retirement, we worked as a consultant for Control Data Systems, Inc., as a member of an implementation team that installed an automated Real Estate Information System in 34 Corps of Engineers Districts.
In the early part of his career he was married and was blessed with six wonderful children. While in Tulsa, he met and married Catherine (Cathy) Miller. The blended family worked out very well for all. The final stopping place was Claremore, because Cathy's daughter lived here, Cathy's Dad and siblings were born here, and he loved the golf course. He was very active in St. Peter's Episcopal Church in Tulsa, and St. Paul's Episcopal Church in Claremore. He volunteered at Meals on Wheels as a driver, purchasing agent, and president. He was diagnosed with Multiple Myeloma in 2013, and life was very difficult after that. He was on chemotherapy all that time.
Besides his parents, he was predeceased by his oldest daughter, LIsa Ashner, of Kansas City.
He is survived by sister Beverly Enloe, St. Louis; Lisa's daughters Danielle, Kansas City, and Nicole, Denver; son Mark Posner, and sons Joe and Carson, Kansas City; son Bob Posner and wife, Pam, and Pam's daughter, Jessie and husband Nathan, and sons, Everett and Corbin, Nashville; daughter Susan Befort and husband Curtis, Kansas City; son David Posner and wife Abby and daughters Heather and Brittany of Cincinnatti; daughter Laura McKenna and husband Zach and daughter Sophia and son Gabriel, Kansas City; Step-son Stephen R. Miller, Tulsa, son Stephen J., Midland, and daughter Arielle and husband Mike and daughter Rylee, and son Wyatt, Midland; and step-daughter JoLynn Foster and husband Brian, Claremore, and son James Foster and wife Courtney, Blanchard, Oklahoma, and son Ryan and wife Abby, Maryville, TN; niece Lori Floerchinger and husband Chris, St. Louis, and nephew Doug Enloe and wife Sandy, Villa Ridge, MO.
To order memorial trees or send flowers to the family in memory of Alfred "Al" Carl Posner, please visit our flower store.