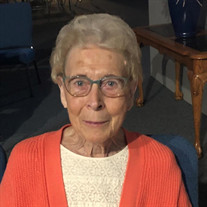 Alma Jo Taber-Marlin passed away on Friday, February 18th, 2022 at the age of 92.
The daughter of Reverend G. A. "Bert" and May Doty Ott was born May 10th, 1929 in Ames, Oklahoma. There she would spend her childhood years. Eventually she would move to Tiawah and live with her sister Amy until her family would follow later. There she would attend Tiawah school, graduating with the class of 1947. It was during this time that she would meet Leroy Taber. They would begin dating and married on July 26, 1947. The couple would make Claremore their home for life, except for one year when they lived in Albuquerque, New Mexico near Leroy's brothers. After years of raising her family, Alma decided to return to work. She became a teller for Rogers County Bank, and was one of the first to work the drive through. After 27 years of working, Alma retired. Then she and Leroy would spend the next several years traveling in their RV. They would go to Texas in the winter, and Colorado in the summer, with a few stops at Branson in between. After Leroy passed away in September of 2001, Alma spent the next several years as a widow. She later began spending time with another widower Walter "Walt" Marlin. The two married in 2009. Over the next several years the couple enjoyed many things together. They enjoyed worshiping at their church. Going to places such as Braums and Branson and events such as gospel singings. They were also members of the Hill Toppers group.
She is preceded in death by her parents Bert and May Ott; husbands, Leroy Taber and Walter Marlin, and siblings, Ira, Ben and Gilbert Ott, and Amy Willhoite.
Survivors include her children: Loyd Taber and wife Debi, and Linda Cramer of Claremore and Connie Liggans of Broken Arrow; grandson, Lonnie Taber and wife Kristin, and great-grandchildren, Layla and Molly of Honolulu, Hawaii where they are currently stationed with the U S Coast Guard; and brother, Jerry Ott and wife Myrna of Eugene Oregon; and sister-in-law Anne Ott of Enid; step-children, Richard Marlin and wife Sandy, Brenda Igarta and husband Rome; step-grandchildren Amy Igarta Seipp and husband Dan, Stacey Short, Jenna Igarta Louderback and husband Mitch, Katy Igarta, and Jessica Marlin-Lapczynski and husband Chris; step-great grandchildren Jack and Mark Seipp, Ansley and Elsa Louderback, Bryce and Garrett Short, and Dillon Marlin Lapczynski.
To order memorial trees or send flowers to the family in memory of Alma Jo Taber-Marlin, please visit our flower store.