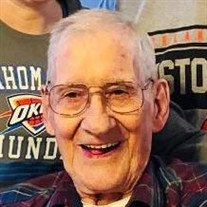 Alva "Buddy" Lee Keeton was born January 10, 1926 in Russellville, Arkansas to Alvin and Beulah{Cook} Keeton. There he was raised during his early childhood. As he became older he and his family frequently moved following work during harvest season. However in his mid teens he and his family settled in the Tulsa area. Buddy having a strong work ethic quickly found a job. He began delivering groceries on his bicycle before upgrading to a car. In the early 1940's Buddy decided to return to Russellville. There after the outbreak of World War II, he enlisted in the United States Army. He served until being honorable discharged after the war. Upon his return home to Russellville he met Joyce Dobbs, the love of his life. A short time later Buddy enrolled at Spartan School of Aeronautics. After becoming a certified mechanic, he began working for McDonnell Douglas. He would work there until retiring from Boeing in 1991.

After his retirement Buddy began focusing more on the things he enjoyed. Things such as hunting and fishing. Working on his farm. Doing things like running cattle, raising a garden and bailing hay. He and Joyce also enjoyed square dancing. The couple traveled all over the country dancing, and was even known to be quite the caller. However having more time to be with his family is what mattered the most to him.

Buddy is preceded in death by his parents, Alvin and Beulah; wife, Joyce Keeton and 2 sisters.

View and sign Buddy's online memorial at www.mmsfuneralhomes.com
To order memorial trees or send flowers to the family in memory of Alva 'Buddy' Lee Keeton, please visit our flower store.