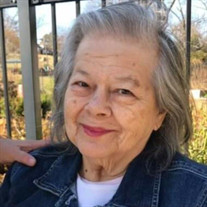 Barbara Mary Estrada passed from her earthly life to return to her Heavenly Home on March 13, 2021 at the age of 86. After several years of dementia she had a stroke in November of 2020. Hospice came back with her to her daughters home in Oklahoma and was with her for the next 5 months until she passed.
She was born May 2, 1934 in Walnut, California, where she grew up. After becoming very sick with high fever when she was around 3 years old, she lost her hearing. She was very athletic and participated in sports like basketball and archery and loved horseback riding. She used to brag of how good she was at shooting baskets in basketball. She was also very artistic. She loved spending time with family, whether it was going out to restaurants, going to pick up grandkids or wherever and whenever it was she wanted to go, she never wanted to be alone.
Barbara’s parents both died young, her father died while serving in WWII in the Navy in 1945 and her mother died of cancer on April 8, 1955. She married Rodney Owen in 1956 and they had 3 children and in 1967 they moved to Prescott, Arizona. In 1970 they divorced and she moved to Phoenix, Arizona and remained there for forty three years.
Being deaf and illiterate and unable to live on her own with no other family to care for her, she lived with her cousin Louis Caballero and his family for several years, who cared for her until her son Robert Owen became old enough to move to Phoenix to live with her and care for her for 3-4 yrs. until she met Eddie Taddei who loved and cared for her for almost 30 years. Although they never married they lived together for 30 yrs. until Ed passed away she was loved as a daughter in law, sister in law, and auntie to the Taddei family. She loved them and they loved her.
Eddie passed away in 2013 when she came to live with her daughters Rose in Oklahoma and Connie California traveling back and forth every 6 months until the last couple of years when she was unable to travel.
Barbara loved family and friends; she was loved by everyone she met. She loved being around her children and grandchildren going to their sporting events and all the activities like graduations, births, birthdays, and holidays. It was extra special because she did not get to do those things much at all with her children while they were growing up, so it was extra sweet for her and her own children’s life that she got to know her grandchildren and to be able to live with her children.
These years with family (Owen, Bass, Romero, Taddei, Zimmerman, Harbour, and Emro families) was really the joyous adult times of her life, she did not like being alone and was cherished by her family who are the most important loves and joys of her life. She will be greatly missed.
She is survived by her son, Robert R. Owen of Safford, Arizona, and daughters, Rose M. (Owen) Bass and son in law Robert E. Bass of Claremore, Oklahoma, Connie J. (Owen) Romero and son in law Sevi Romero of Stockton, California. The Taddei Family, 22 grandchildren, 18 great grandchildren, 8 gr.gr grandchildren, very special nieces and nephews from the Taddei side and many friends, all who loved her to pieces. She was preceded in death by her father Robert R. Estrada, her mother Lucy F. (Monroy) Baque, her brother Richard Baque, and Edward Taddei her love, In laws; Edward Sr. and Braulia Taddei, and brother In law Robert Taddei.
She will be laid to rest at Saint Francise Catholic Cemetery in Phoenix, Arizona Maricopa County, March 2021
To order memorial trees or send flowers to the family in memory of Barbara Mary Estrada, please visit our flower store.