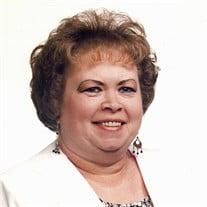 Born October 12. 1940 in Goodman, Missouri, she was the daughter of Roy and Elsie (Charlton) Eads. Barbara attended high school in Missouri and following her graduation, she moved to Kansas City, Kansas. While living here she met her husband, and together they started a family. Later Barbara moved to Tulsa and married Vernon Prather. Then she soon moved to Claremore and this has been home for Barbara since.

Her studies didn't end with high school, Barbara attended business school and was knowledgeable in the way an office should run. She was a bookkeeper at times, but spent most of her working career with the US Postal Service, working in Tulsa as a mail sorter. Barbara's first priority was her family and she tended to her household graciously. She loved crocheting and quilting; each one of her children and grandchildren have one of her hand crafted quilts. Barbara was also a Bible scholar, she not only read her Bible daily, she would study a certain scripture and reference it to the many sources she had.

She was preceded in death by her parents, husband Vernon Prather, great-grandson Jameson Olsen; her brother Roy Eads, Jr. and sister Virginia Brodie.
To order memorial trees or send flowers to the family in memory of Barbara Jean Prather, please visit our flower store.