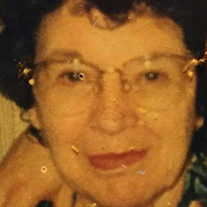 Funeral service for Betty Short will be held on Thursday, October 10, 2019 at the MMS-Payne Funeral Home Chapel. She passed away on Tuesday, October 8, 2019. She was 89.

Born in San Francisco, California to Stanley Sylvester and Lila Hazel (Rais) Garvin, Betty attended schools in northern California. It was while living there that she met Wilmer Short, and the couple married in 1951. During this time Betty worked primarily as a house cleaner.

In 1977 they moved to Oklahoma, settling in Chelsea. Betty continued cleaning for families and taking care of her own. She enjoyed spending time with her family, fixing them lunch and dinner. Betty also loved being outside, camping around Spencer Creek, and raising her vegetables. She was the one who kept the family close knit.

Those family members that survive include her children, Laura S. Owens and husband Michael, Skeeter Sherman and husband Roger and Willy Short, Jr.; 9 grandchildren; 11 great grandchildren and one on the way.

Betty was preceded in death by her parents, husband Wilmer, her daughter Linda E. Cooper, her granddaughter Crystal, grandson Roger Jr. and her brother Stanley Garvin.
To order memorial trees or send flowers to the family in memory of Betty Rose Short, please visit our flower store.