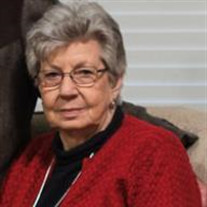 A Memorial Service will be held at the First Baptist Church in Chelsea on Friday, December 3, 2021 at 2:00 p.m.
Billie was born to Bruce and Reba Martin October 11, 1942. She attended Charleston Public Schools and graduated in the class of 1961. One evening at a Football game in Charleston she met the love of her life, Tom Green. The two married on June 15, 1963. They lived in Charleston for several years while Tom worked for Billie's fathers trucking business. During their first couple years of marriage the couple moved around to several places. They lived in New Mexico for some time working on a cattle and hunting ranch, Tom was the ranch foreman and Billie helped as a waitress and housekeeper. The couple would eventually settled down in Rogers county and making their home in Chelsea, Oklahoma.
Billie enjoyed the friendships she made with the ladies from the sport booster club and Chelsea Roundup Club. Billie loved to go bowling and did with her group of friends for 30 years. She and Tom were heavily involved in the Chelsea Roundup Club for many years. Billie was very proud of her time working at Cinch Industries and worked very hard to provide for her kids.  Billies passion was her family. She and Tom most enjoyed following their children and grandchildren’s sports.
Billie is survived by her son Joel Green and wife Janet, son Scott Green, daughter Melissa Plummer and husband Bruce, grandchildren Stephanie Green, Josh and Melissa Collins, Jake and Kaci Collins, Rachel and Blaine Luper, Hope Plummer. Great-grandchildren Jase Luper, Andy Collins, Elias Luper; and brother Johnny Martin and wife Sandy along with many other nieces, nephews and extend family members. Billie Sue Green passed away on November 27th, 2021 she was 79 years old.
To order memorial trees or send flowers to the family in memory of Billie Sue Green, please visit our flower store.