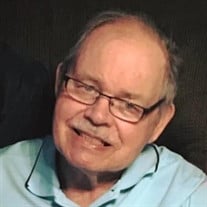 Graveside service for Bill Brasher will be 10:00 a.m., Monday, March 30, 2020 at Wofford Cemetery, in Verdigris.  Friends may visit at the funeral home on Sunday, March 29, from 3 p.m.-6 p.m.  Bill passed away at his home on March 26, 2020, with his loving family at his side.  He was 80.
Born May 14th, 1939 in Cave City, Arkansas to Staton Marvin and Fannie May (Sherrill) Brasher, Bill received his education first in Manila, Arkansas and graduated from O'Fallon High School in St. Louis Missouri, with the class of 1959.  He proudly served his country first in the US Army and later the US Navy.  On June 24, 1963 he married Consetti Marie Messina in Helena Arkansas and the couple made their home first in St. Louis, before living in Helena for a time.  In 1976 they moved to Oklahoma and settled in the Verdigris area.  Bill was employed with Agrico, which later became Terra Nitrogen.
A family man, Bill took great care of his wife and children and made sure they had what they needed throughout his entire life.  He enjoyed coaching and refereeing soccer and attended many of his kids and grandkids activities as well.  Bill also enjoyed fishing and woodworking.  His grandchildren were recipients of many items he made throughout the years.  Bill was a member of St. Cecilia’s Catholic church and also a member of the Knights of Columbus Council 7395. He gave of his time volunteering many hours in the community with his favorite of delivering for Meals on Wheels.  He was a bargain shopper and could never refuse any item he could get at a great price.
A wonderful husband, father, grandfather and friend, Bill will be missed by all who knew him.  Those family members that survive include his wife Marie of their home; his children Mary Fraase and husband Will, Tina York and husband Todd, Dominic Brasher and wife Dana, Sharon LaValley and husband Larry, Mike Brasher and wife Michele, and Laura Brown and husband Stacy; his grandchildren Krystianna Alward and husband Kyle, Lexie Keith and husband Jordan, Dakota Brasher, Hayden Walker and husband Carson, Jordan Fraase, Brylee Brasher, Staton Brasher, William Fraase, Holden Brown, Jacob York, Bryant Brasher, Jaci Brasher, and Madi York; his sister Brenda Wieda and many nieces and nephews.  Bill was preceded in death by his parents Staton and Fannie Brasher, sisters Betty Romine and Wanda Curcio.
In lieu of flowers please consider a donation in Bill's name to Meals On Wheels, 715 McClellan Avenue, Claremore, Oklahoma 74017.
To order memorial trees or send flowers to the family in memory of Billy Boyd Brasher, please visit our flower store.