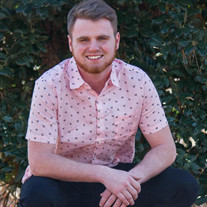 The son of Kevin and Gloria George Rowe was born June 28, 2000 in Claremore, Oklahoma. He was raised in Adair, where he would begin attending school. His freshman year he would move to Inola. There he became active in wrestling, football, baseball and agriculture. He would graduate as a member of the class of 2019. After graduating Blake quickly began his working career. It started at Endot helping make fiber optic cable. He then moved over to his current employer, Osburn Construction where he helped install the cable.

In his spare time Blake had many hobbies and pastimes. He loved fishing, and taking selfies. He was even a good mechanic, although it was mostly out of necessity. However spending time with his step-sister, and his brother is what brought him the most enjoyment.

View and sign Blake's online memorial at www.mmsfuneralhomes.com
To order memorial trees or send flowers to the family in memory of Blake Anthony Rowe, please visit our flower store.