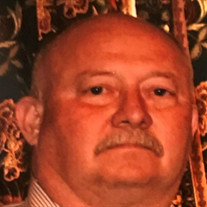 Funeral service for Claremore resident Conrad Dunaway will be 11:00 am Thursday, June 6, 2019, at MMS-Payne Funeral Home. Burial will follow at Lone Elm Cemetery. Visitation will be at the Funeral Home on Wednesday from 1-8 pm, with family greeting friends from 6-8 pm.
Conrad passed away at St. Francis Hospital in Tulsa on Saturday, June 1, 2019. He was 66 years old.
He was born in Claremore on March 19, 1953, the son of Leroy Conrad Dunaway and Francis Marie (Luke) Dunaway. As a child, he attended Justus School, later transferring to Claremore High School, where he graduated in 1971.
On October 11, 1975, Conrad married Leta Weaver in Claremore. They made their home in Claremore, where they raised their two children. Conrad worked for UBA Heat, then Worthington, until the company closed. He then worked at Nupar Manufacturing until his retirement in 2015.
In his spare time, Conrad enjoyed old cars, working on the farm, and watching drag racing on television. He also enjoyed a few trips to Tunica, Mississippi. But most of all, he cherished time spent with his grandchildren.
Conrad was preceded in death by his parents and his wife Leta.
Survivors include his children Leroy Dunaway and wife Samantha and Marie Pickerel and husband Christen; grandchildren Caleb, Hayden, Jase, and Carina; great-grandchild Zeppelin; and brother David Dunaway and wife Barbara.
To order memorial trees or send flowers to the family in memory of Conrad Dunaway, please visit our flower store.