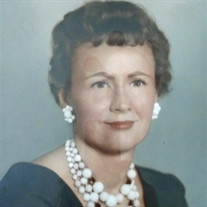 The daughter of Frederick "Lee" and Belle (Oxford) True was born January 7th, 1928 in Tulsa, Oklahoma. There she was raised and attended school. It was also in Tulsa where she met Henry Germany. They would marry in March of 1946. They made their home in Tulsa before moving to Foyil in November of 1962.

In her spare time Daisy loved gardening and canning fruits and vegetables. She also enjoyed taking care of animals such as hummingbirds, cattle and her dogs. However spending time with her grandchildren is what she loved the most.

View and sign Daisy's online memorial at www.mmsfuneralhomes.com
To order memorial trees or send flowers to the family in memory of Daisy Maebelle Germany, please visit our flower store.