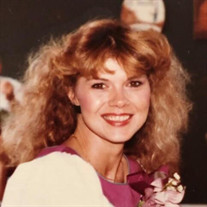 Debra Suzanne (Thomas) Osten passed away from this life to enter her eternal rest on March 2, 2022 at the age of 67 years.
The daughter of Robert Thomas and Marie (Barnard) Thomas , and younger sister of Bobby Thomas, Debra was born in Tulsa, Oklahoma on August 26, 1954. Her early years were spent in Arizona, where her father worked in a copper mine. She and her family returned to Tulsa in 1959, where she began school. In the spring of 1967, she and her family moved to Chelsea, where she attended Jr. High through High School. She graduated as a Chelsea Dragon in 1972. On September 30, 1972, Debi married Mike Osten at the Chelsea Memorial Methodist Church. On April 3, 1973 she gave birth to a baby boy, Robert Brock Osten, whom she would devote her life to. She was a great and loved mother. Debi and Mike later divorced. She worked very hard as a single mother and provided for her son well. In 1974 she followed her father and brother into the Boilermakers Local 592 Tulsa, and worked there briefly. Later she began working in retail at her mother’s dress shop in Claremore. After that she started her own business, Osten Professional Maintenance, where she worked until her retirement in 2003. She was an avid reader, loved her dogs, Oklahoma Sooners football, and going out with friends. Above all she loved and cherished her family. Her son Brock and grandson Conner truly were the love of her life. She will be missed but never forgotten.
Debi is preceded in death by her father Robert F. Thomas and her mother Marie Thomas.
Those left to mourn her passing are her son Brock Osten, grandson Conner Osten, brother Bobby Thomas, his wife Joni, and nephew Chris Thomas, as well as many extended family members, loved ones, and friends.
To order memorial trees or send flowers to the family in memory of Debra Suzanne Osten, please visit our flower store.