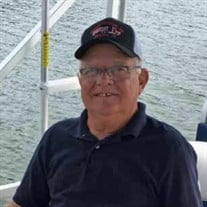 Born January 27, 1946 in Claremore, Oklahoma to Lee Robert and Ladema Pearl (Oaks) Harris, Delbert attended schools in Claremore, graduating with the class of 1964. He married Mary Jean Rhine on February 21, 1964 and the couple made their home in Claremore, where they raised their 3 children.

Delbert worked as a concrete salesman throughout his life and was with Greenhill Concrete at the time of his passing. After Claremore, Delbert and Mary move to Grand Lake where he enjoyed fishing every chance he could.

Those family members that survive include his wife Mary of the home; his children David Harris and wife Jann, Robin Coyle and husband Brady, and Tracy Hanson; grandchildren Whitney Brashears, William Harris, Margaret Harris, Emma Harris, Andrew Hall, Madalyn Hall, and Sam Harris; his sister Wilma Hinds and his brother Douglas Harris and wife Velma and many nieces and nephews and extended family members. Delbert was preceded in death by his parents, and his brother Lee (Sonny) Harris.
To order memorial trees or send flowers to the family in memory of Delbert Jay Harris, please visit our flower store.