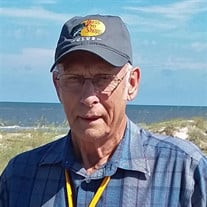 Born May 28, 1943 in Uniontown, Arkansas to Levi and Barbara (Hooper) Hibbard, Donald attended school in Cedarville, graduating from high school in 1960. On December 20, 1961 he married Velma Neighbors and the couple lived in Cedarville for a time before living in Wichita, Tulsa, then to Inola, and this has been home for the past 52 years.

Donald was a faithful employee for 36 years at Boeing Aircraft, retiring in 1999. When he wasn't busy working, he enjoyed fishing, woodworking, and traveling. Ft. Gibson was one of his favorite places to go. Donald had an ability to make anything out of wood; from tables, toys, and step stools, he lovingly made something for each of his family. He and Velma spent time together traveling around the countryside. Lately they loved taking bus tours to different destinations. Gardening was another hobby he enjoyed and his green thumb helped supply his neighbors with wonderful produce.

The things that mattered most in Donald's life was his family. He brought them up with morels and respect that he showed in his daily life. He loved his church and served as a deacon for over 20 years.