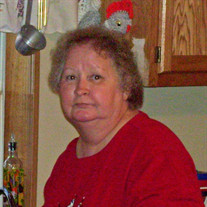 Dorothy Francis Patton, 76 years old, went to be with her Lord and Savior on January 10, 2021. Dorothy was born May 6, 1944, to Lee Roy and Jewel Bennett in White Oak, Oklahoma, on May 6, 1944. Growing up she attended White Oak School and graduated from Big Cabin School in 1962. Dorothy attended cosmetology school with her sister Linda and also worked at V & V Drugs in Vinita for many years. Dorothy met the love of her life, her husband, Charley Earl Patton, through Charley’s brother Bill, from that day forward the two created a life together.
Dorothy was a simple lady, she had a passion for cooking and enjoyed being in the kitchen. She was known to cook meals big enough to feed anyone and everyone, and made some of the best homemade pies around. Dorothy was heavily involved with her church, Faith Temple. She cooked for most of the church functions including church summer camps. She loved to sing at Church in her later years. Most importantly she loved her family and grand-kids dearly.

She is preceded in death by her parents Lee Roy and Jewel Bennett, 5 brothers and 5 sisters.

A memorial service is set for Wednesday, March 10, 2021, at 10:00 A.M. at the Foyil House of Prayer Holiness Church, 14101 S. Highway 66, Claremore, Oklahoma.
To order memorial trees or send flowers to the family in memory of Dorothy Francis Patton, please visit our flower store.