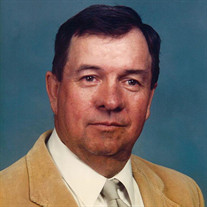 Gene was born on Nov. 30, 1931, to Dorsey McKinley and Edith Irene Spurlock on a farm near Claremore. He grew up in Rogers County and attended Justus Elementary School. He and his family grew blackberries and sold them in the city of Claremore.

He graduated from Claremore High School with the class of 1951. He was a proud member of the organization, "The Future Farmers of America,” being a charter member of the Claremore chapter.

He met his future wife on a blind date in Oklahoma City, OK when he was 29 and she was 18. On Feb. 12, 1961, they became husband and wife. The couple were married for 59 years and had two children. They resided in Bristow, Oklahoma for several weeks after their vows, and then transferred to Idabel, Oklahoma for his work. This is where they welcomed their first child, Jenean.
His entire career was spent in conservation. He worked as a District Equipment Manager with the Rogers County Conservation District in the mid-50’s. His work took him to many different towns around the state of Oklahoma including Bristow, Hugo, Wewoka, Wilburton, Idabel, and Claremore. As a leader in the business, he was promoted to Survey Chief in Idabel. He retired from Soil Conservation in 1988, then was employed with the Abandoned Mine Land Reclamation Projects in 1989 for 32 years. They welcomed their second child, David, in McAlester in 1970.

He also enjoyed tending to his cattle, the company of his two dogs, and serving in the church by visiting and praying for anyone in need. He was known for having a plentiful garden and sharing the crops with his community.

Grandpa Gene was truly made to be a grandpa, and nothing made him happier than to be surrounded by his children and seven grandchildren.

Donations can be made to the Oklahoma Baptist Homes for Children, 3800 N May Ave., Oklahoma City, OK 73112. Give at obhc.org (405) 942-3800.
To order memorial trees or send flowers to the family in memory of Dorsey Eugene Spurlock, please visit our flower store.