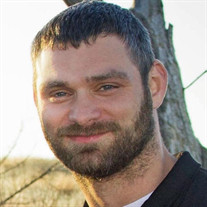 The son of Jeremy Barbee and Lena (Tucker) Leach was born February 7th, 1990 in Tulsa, Oklahoma. He was raised in the Chelsea and Foyil area. There he would attend school were he loved playing football. After finishing school Dustin met Kelli Botkin. They began dating and married a short time later. Together they would have two children. As time moved on Dustin would expand his working career. Over the next several years he would work as a valve body specialist and most recently as a tree trimmer working for Harden Tree Service. It was during the past couple of years that he met Kalista Wolf. Together they would have one child.

In his spare time Dustin had many hobbies and past times. He loved being outdoors. Fishing, hunting and camping were part of his everyday lifestyle. He was also known for his love of loud music, dancing and hanging out with his friends. In fact everyone who knew him knows the phrase "finger popin" Over the last couple of years he has even taken up fighting with Rec it Muay Thai fighting. Competing in numerous local events and even at the Hard Rock Casino. However nothing in his life was more important than his family, especially his three boys.

He is preceded in death by his father, Jeremy Barbee; grandfather, Danny Barbee, and aunt Trina Martin.

View and sign Dustin's online memorial at www.mmsfuneralhomes.com
To order memorial trees or send flowers to the family in memory of Dustin Michael Tucker, please visit our flower store.