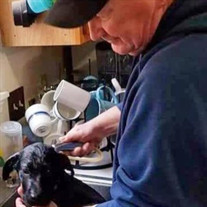 Dwayne Lee Hurst passed away on June 28, 2021. He was 55 years old. Dwayne was born to Bennett Ocie Hurst and Terry Lynn Hurst in Glendale, Arizona. Not long after he was born, the family moved to Claremore, Oklahoma where they planted their roots and raised their family. Dwayne attended Sequoyah Public Schools, where he played football and competed in shot put and discus in track and field. He had a passion for hunting and thoroughly enjoyed going on hunting trips with his friends and family. One of his favorite hunting memories was going to Wyoming with his dad, brother and friends. Dwayne also was a member of the single action shooter society where he would compete in shooting competitions. His moniker was “Pudgy Stump”.  Dwayne just hit his twenty year anniversary at T.D. Williamson Inline Inspections as a senior field technician. He was a compassionate and unpretentious person, and was known as "Uncle Wayne" to everyone around him. Above everything else, Dwayne loved his family & friends dearly.
He is preceded in death by his dad Benny, his brothers-in-law Ray & Lewis and nephew Zachary Sharp.
Dwayne is survived by his mother, his siblings, several nieces and nephews, and his very spoiled fur-baby, Samson.
Memorial service will be 10:30 a.m. on July 10, 2021 at Eastern Hills Baptist Church. Guests may bring a covered dish in a disposable container and join the family for lunch after the service.
To order memorial trees or send flowers to the family in memory of Dwayne Lee Hurst, please visit our flower store.