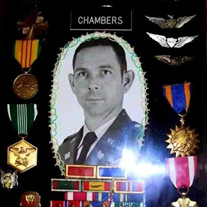 Earl E Chambers was born in Claremore, Oklahoma to Sam E. and Rachael Chambers, long time residents of Claremore. In 1961, Earl graduated high school and was married to Nita Jo Orr, the love of his life. That same year, Earl joined the Air Force which led to a highly decorated career and a tour in Vietnam with the Jolly Green Giants, search and rescue.

He provided for his family a unique lifestyle of travel and adventure that few get to experience. Following his service with the Air Force, Earl was recruited by Army Aviation to go to flight school, his lifelong dream. He went back to Vietnam as an attack helicopter pilot. During his service, he graduated at the top of his class at the University of New Mexico in Airport Management, as well as his technical classes in the military. He retired for the Army’s 101st Airborne Division in 1981. Returning to Claremore, he built his forever home and started his new career, again highly successful, as a Customer Service Representative for Bell Helicopter. Later, Earl became Plant Manager for Ford Glass, U.S. Steel, and finally Baldwin Steel.

In 2002, Earl suffered a severe stroke that cost him his ability to speak and reduced him to just a normal man. Earl did not let the loss of his right arm stop him from working every day. He had an indominable force of will, and although hobbled, continued to work and shower love on his family and his community. Earl is the kind of man that every kid should have as a father, the kind of husband every wife would be lucky to have, and the kind of brother and friend everyone admired. He had the unique ability to build, fix, or invent almost anything. Earl was a huge contributor to the Will Rogers Roundup Club and ranched in Rogers County up until the last few years of his life.

Earl received many accolades for his service in the military. They are too numerous to list, but four Distinguished Flying Crosses to name a few. He worked hard every day to show his love for his wife, children, and family. We agree he was the greatest man we have had the honor of knowing.

Earl and Nita will be interred at Arlington National Cemetery. In lieu of flowers, please donate to your local VFW. A hometown celebration honoring Earl will be held Sunday, September 5th at 1:00 p.m. at the family farm, 16265 S. 4190 Road, Claremore, OK. All friends, family, and patriots are invited.
To order memorial trees or send flowers to the family in memory of Earl Chambers, please visit our flower store.