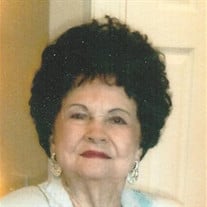 Funeral service for Elaine B. Curtis will be 1:00 pm Friday, August 16, 2019, at Claremore First United Methodist Church, with Jamie Willis officiating. Burial will follow in Woodlawn Cemetery. Visitation will be at MMS-Payne Funeral Home in Claremore on Thursday, August 15, from 6-8 pm, with family greeting friends from 5-7 pm. Elaine passed away at Brookfield Assisted Living Center in Claremore on Sunday, August 11, 2019. She was 97 years old.
Elaine was born in Tiskilwa, IL on May 9, 1922, the third of ten children of Carl Albert Gustafson and Florence (Griffin) Gustafson. She grew up and attended school in Walnut, IL. While working as a waitress in Walnut, Elaine met Paul Curtis, a local high school teacher. They began dating, and were married in Davenport, IA on April 2, 1939. Over the next several years Elaine and Paul became the proud parents of five children. Sadly, the youngest, Richard Paul, died shortly after birth.
In 1952, the Curtis family purchased a dairy farm and moved to Kirksville, MO. Soon thereafter, Elaine began working at Hartzell's Supper Club. For two years, she worked as a waitress and learned the business. From there, she began working at the Colonial Manor restaurant in 1954. Within a year, the manager had passed away, leaving Elaine to manage the restaurant. She did such an excellent job that investors soon approached her about financing a new building of her own design to house a new restaurant, which would be called Elaine's Dining Room. Thus continued her illustrious career, and Elaine's became the center of the community for many years. It was the place to see and be seen, famous for it's excellent food, especially the cinnamon rolls. Paul joined her in the business, being an excellent chef and grill master. All of her family members, and even in-laws, joined in the business at one time or another. Jobs at Elaine's financed a college education for many local young people.
After serving the public for over twenty-one years, Elaine's was destroyed by fire on September 24, 1978. Never one to be idle, Elaine began another career in the safety and security department of Northeast Missouri State University, which later became Truman State University. In 1983, she moved to Claremore to be near her children, and began working as a receptionist in the medical office of her son-in-law, Dr. Fred Northrop.
Elaine was always passionate about keeping her lawn, as well as those of her neighbors, in perfect shape. She often began mowing the neighbors' lawns to motivate them to finish the job. She was even known to climb onto her roof to sweep off the leaves that accumulated there.
Elaine loved her family unconditionally. They were the center of her life and she was the center of theirs. Everyone sought her approval, but knew that even if they failed, her love would never fail or falter. She will be missed by all, but they are celebrating her life and her homecoming with Jesus.
Elaine was preceded in death by her husband Paul, her parents, nine siblings, children, Richard Paul Curtis, Thomas Lloyd Curtis, and James Walter Curtis, and grandchildren Kelly Curtis, Katherine Northrop, and Jeffery Cassady.
Those left to mourn her passing are her daughters, Patricia Ann Northrop and husband Dr. Fred Northrop, and Karen Sue Wright and husband Edward Wright; grandchildren, Tayna Monk and husband Steve, Jan Seago and husband Jerry, Cynthia Nerins and husband Glenn, Timothy Curtis and wife Cari, Kenneth Curtis and wife April, Joseph Cassady and wife Barbara, James Curtis and wife Tracy, and Chrissy McKee and husband Ryan. Also fourteen great-grandchildren and seven great-great-grandchildren.
Memorial contributions may be made to Adair County Historical Society, 211 S. Ellson St., Kirksville, MO, 63501, or First United Methodist Church, 1615 N. Hwy 88, Claremore, OK, 74017. View and sign Elaine's online memorial at www.mmsfuneralhomes.com .
To order memorial trees or send flowers to the family in memory of Elaine B. Curtis, please visit our flower store.