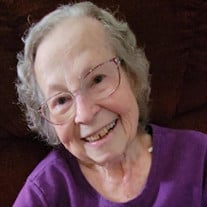 Service for Fredda Fern Morgan will be 11:00 a.m., Monday, August 29, 2022, at Oakhaven Memorial Gardens Chapel in Claremore under the direction of MMS-Payne Funeral Home. Fredda entered her heavenly home on Tuesday, August 23, 2022. She was 91.
The daughter of Benjamin Harrison and Pearl Esther (Farmer) Anderson, Fredda was born on June 9, 1931 in Lubbock Texas, where she grew up and caught the eye of a young preacher boy, Thomas Morgan. Tom and Fredda were married on July 6, 1950. Shortly after they were married, the young couple moved to Fort Worth, Texas where Tom attended Southwestern Baptist Theological Seminary. To support her husband’s call to the ministry, Fredda worked full time as an office clerk at a finance company. Upon the birth of their first child, Fredda became a full-time mother, devoted to rearing her three children while serving along-side her husband at several small country churches over the course of their marriage until he retired in 1987. Fredda was a member of Memorial Heights Baptist Church in Claremore. She enjoyed sewing, cross stitch, jigsaw puzzles, and word games. Most of all, she loved spending time with her family and best friend, Tux, her cat.
She is survived by her children, Denise Rae Morgan and companion, Roger Talbot of Bonita Springs, Florida, Douglas Wayne Morgan and wife Lori, of College Station, Texas, and Sherry Strickland and husband, Danny of Claremore; grandchildren Ryan Prewitt and wife, Stephanie of Mansfield, Texas, Jennifer Hall and husband, Chad of Spring, Texas, and Dr. Kyleigh Strickland of Los Angeles, California; great-grandchildren, Emma Hall, Jaxton Prewitt, Kamrin McGuire and Rylin McGuire. Fredda was preceded in death by husband, Thomas Morgan, her parents, her sister, Dorothy “Willeen” Clark, and brothers, Robert, Clyde, and Gene.
To order memorial trees or send flowers to the family in memory of Fredda Fern Morgan, please visit our flower store.