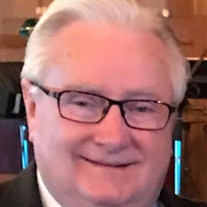 Reverend Glendon Ray Nance of Chelsea Oklahoma was born in Oklahoma City, Oklahoma to Dennis and Lillie Nance on April 18, 1950 and died on February 20, 2021 in Tulsa Oklahoma at the age of 70 years, 9 months and 20 days. He is survived by his wife Sherrie Nance of the home, brother Rick and wife Linda Nance of Adair, Oklahoma; sister Vicki and husband Stephen Binion of Columbia, Mississippi, son Daron and wife Joy Hudspeth of Seminole Florida, son Jonathan and wife Laura Hudspeth of Alexandria, Louisiana, daughter Shanna and husband Brian Paul of Pacific, Missouri, along with 5 nephews, 2 neices, 8 grandchildren, 4 great grandchildren and a host of friends and extended family members. He was preceeded in death by his father Dennis Nance and his mother Lillie Nance.

Growing up, Glen attended Southeast United Pentecostal Church, pastored by Reverend R.D Whalen. He was baptized in Jesus Name at the age of 14, and received the gift of the Holy Ghost at the age of 19. After graduating from Southeast High School in Oklahoma City in 1968, he headed north to St. Paul, Minnesota and attended Apostolic Bible Institute, from which he graduated in 1972.

Glen was a jack of all trades. He started his work life as a paper boy. Through the years his jobs included: working as a dish washer, selling healthcare insurance to farmers, salesman in the auto department at Montgomery Ward, traveling field representative for Tupelo Children’s Mansion, city bus driver, Bible College instructor, evangelist, carpet salesman and installer, school bus driver, paper route manager, indentured servant in his Dad’s body shop—a position he begrudgingly held until he was emancipated at age 18, computer tape courier, traveling promotion rep for ABI, Plastics Incorporated machinist, church maintenance worker, janitor and handyman (a.k.a. pastor), produce assistant manager in a grocery store, heated vending machines representative, employment agency placement specialist, owner and manager of his own carpet store; and believe it or not; there were more.

On July 19, 2003 Glen married the love of his life, Sherrie Hudspeth. Glen said that before he dated his “Shay-Jo”, he had never even considered marriage with anyone else. Together they built a life they loved, settling down in Chelsea. Glen brought his bride coffee on the front porch every morning, where they would sit and enjoy the sunrise together. Glen and Sherrie took care to support their local community. They did their shopping and dining and all of their business in Chelsea. They befriended many members of the community that they pastored in, and forged many friendships along the way. They had 18 happy years, serving God and one another.

Glen was a man of many talents. He was an accomplished violinist. He was a racquetball player and an avid chess player. Glen loved to fish and spent many hours with Rick and Denny fishing on Bro. Little's pond, and he and Sherrie really enjoyed the pastor appreciation dinners hosted by Bro. and Sis. Dawes.

Glen was also a jack of all ministries. He served the Oklahoma District as both District Youth Secretary and District Youth President; and as an unmarried Youth President he pioneered the first ever Marriage Retreat for the Oklahoma District. He served on the district Board as the Presbyter of Section One for several years. Throughout his ministry, Glen filled many ministerial positions, including evangelist, preacher, pastor, teacher and traveling promoter for both Tupelo Children’s Mansion and ABI. He pastored churches in 4 Oklahoma towns: Mangum, Weatherford, Blackwell, and Chelsea.

In all their years of ministry, through all the positions they held and places that they ministered, when Glen and Sherrie came to Chelsea to pastor the United Pentecostal Church, they realized they had come home. They and their church people found in one another the deepest bonds of faith and fellowship that they had ever before experienced. Glen was always bragging to anyone who would listen about how precious and loving his saints were to him and his Sherrie. We have asked the saints of the Chelsea church to sit with the family today, in honor of that bond between a pastor and his people. Glen said that the years he spent pastoring the Chelsea church were the happiest and most fulfilling of his ministry. He loved deeply, and will be deeply missed.
To order memorial trees or send flowers to the family in memory of Glendon Ray Nance, please visit our flower store.