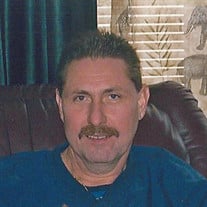 Henry Leon Robinson passed away on October 25, 2020. He was 64 years old. Leon was born to James and Beulah Robinson in Seneca, Missouri. Leon grew up in the Seneca area throughout his childhood, graduating from Seneca High School with the class of 1974. When Leon was 18 years old, he met the love of his life, Rennah Kay Prater while she was working at Mr B’s Diner in Seneca. Leon started working at Missouri Steel Co and BF Goodrich. They made their home across the state line in Oklahoma. While living there they were blessed with twin boys, Kurt and Kris, on August 18, 1977. Leon eventually moved his family to Oologah, OK after graduating from Spartan School of Aeronautics and began his career at American Airlines. After 20 years with American Airlines, he worked in contract management with other airline industries, retiring just this year. Leon enjoyed traveling with his family and friends. Some of his favorite destinations were Hawaii, Jamaica and Cancun, Mexico. He loved to support his boys in all their sporting events. He was an OU and Dallas Cowboys fan. But most importantly, Leon loved spending time with his grandchildren. Preceded in death by parents, 5 brothers - Floyd, Norman, Vernon, James, Carl and 3 sisters - Evelyn, Thelma, and Ruthie, one grandson Kaden Michael Robinson. Leon is survived by his wife, Rennah Robinson of 46 years, sons Kurt Robinson of Daphane, Alabama and Kris Robinson of Claremore, Grandchildren Olivia, Evan and Quinn of Daphane, Alabama. Also survived by nephew, Larry Robinson of Midwest City and a vast number of relatives belonging to the Prater family tree.
To order memorial trees or send flowers to the family in memory of Henry Leon Robinson, please visit our flower store.