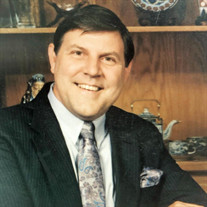 Born May 4, 1946 in Tulsa, Oklahoma to John David and Virginia Lee (Hutchison) Moody, Jack attended schools in Tulsa, graduating with the class of 1964 from Central High School. Following his graduation, he and Sharon Benge were married and the couple made their home in Tulsa.

Jack worked as a manager for Fred's Red Bud Grocery for a time, later he began working for Newman's Incorporated as a salesman. He was very knowledgeable in oilfield valves and became more so through the years. Jack eventually became self-employed and was very successful. Later he worked for Redman Supply extending his expertise to the company until his retirement.

Verdigris became home for the Moody family in 1974 and Jack enjoyed following his sons with their sporting activities. He wasn't only their coach in baseball, but he became the commissioner of the baseball league. Jack loved keeping his yard and home in tip-top shape and was organized in everything he did. He loved spending time camping and playing golf, but being with his family was what he loved the most. He never missed his sons or grand kids events, even if it was soccer. Jack's other hobbies included watching westerns, listening to Elvis, coin collecting, and working crossword puzzles.

The patriarch, Jack was looked up to by family and friends alike. He loved them and it showed in his generosity and caring advice. He taught Sunday School for 7th and 8th graders at First Baptist Church, where he was a member. He was a big supporter of Sharon and her work at "His House Ministry" and many of the girls looked up to him as a role model. Jack was considered a quiet Christian, his walk with the Lord showed in his daily life. His home was filled with lots of laughter and happy times attributed to the love of the Lord being the center of the home.

Those family members that survive include his wife Sharon his wife of 55 years; his sons Brian Moody and wife Kim of Claremore, Chris Moody and wife Tina of Tulsa, and Chad Moody and wife Jill also of Claremore; his grandchildren Mackenzie Moody, Mason Moody, Megan McMillen and husband Kyler, Moriah Moody, Seth Moody, Max Moody, Jordyn Moody, and Jericho Moody; his sisters Vicki Baker, Carol White and husband Danny, and Pacy Adams and husband Rusty, sister- in-law Sandy Moody; his daughters of the heart Kristal McHugh and husband Tim and Nikki Ward and husband Eddie; and many nieces and nephews. Jack was preceded in death by his parents and his brother Jim Moody and nephews Steve Baker and Joseph Baker.

Those who wish to honor Jack's memory with a memorial contribution may do so by contributing to "His House Ministry", P.O. Box 2040, Claremore, Oklahoma 74018.
To order memorial trees or send flowers to the family in memory of Jack David Moody, please visit our flower store.