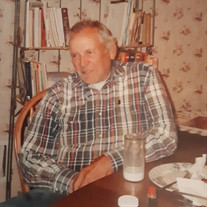 James Lee Eimer age 83, died peacefully in the arms of his wife on December 3, 2020 at their home in Claremore, Oklahoma after a courageous battle with cancer.
James was born on April 19, 1937 in Tulsa, Oklahoma to Clark and Ester Eimer.
James graduated from Will Rogers High School. He was employed for many years with the city of Tulsa, spent 8 years in the Navy Reserve, and retired from Baker Hughes in Claremore, Oklahoma. He was a lifelong rancher.
Besides spending time with his family and tending to their farm, James enjoyed fishing, and was an avid “junk” collector. He was always outdoors tinkering with something and could fix just about anything.
James is survived by his wife Lynn, 3 children of his own, 3 children by marriage, several grandchildren, great-grandchildren, and numerous nieces, nephews and friends. He was proceeded in death by his parents, 1 brother and 4 sisters.
Family and friends are invited to attend a graveside service on Friday, December 11 at 1:00 p.m. at Wards Grove Cemetery in Foyil, Oklahoma where James will be laid to rest.
In lieu of flowers, the family requests that donations be made to MD Anderson Cancer Center in honor of James.
To order memorial trees or send flowers to the family in memory of James Lee Eimer, please visit our flower store.