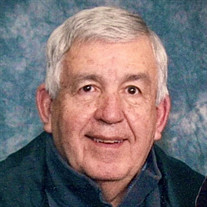 Dr. James Willis Marshall September 7, 1936 - February 9, 2022 Dr. James Willis Marshall, age 85, graduated to glory on Wednesday, Feb. 9, 2022, from home, as he wished, with his wife of 64 years, Mary, nearby. Jim was born on September 7, 1936 in Pryor, Oklahoma. He was the son of Joe Willis Marshall and Juanetta Sanders Marshall. He loved growing up in Claremore and being a member of the CHS Class of 1954. His classmates remained his dear friends throughout his life. He met his future wife, Mary Aleen Love, on a blind date when they were teenagers. They were married on August 7, 1957 while both were students at Oklahoma State University. Their marriage was blessed with two children, Laura and Will. Jim was a proud member of the Sigma Alpha Epsilon fraternity at OSU and kept in touch with many of his SAE brothers through the years. Jim and Mary lived in Kansas City, Missouri while Jim attended dental school at the University of Kansas City. Upon graduation in 1962, Jim accepted a commission in the U.S. Air Force as a Captain in the Dental Corps. He and Mary spent the next two years at Davis Monthan Air Force Base in Tucson, Arizona before returning to Claremore in 1964 for Jim to start his own dental practice. During this time, Jim served as the President of the Claremore Rotary Club and Exalted Ruler of the Elks Lodge, like his father before him. In 1971, Jim attended a seminar by the evangelist Oral Roberts in Tulsa. He encountered Jesus at that seminar and his life was never the same! Jim became a member of the charter class at Rhema Bible College and for the rest of his life, his greatest joy was telling others about Jesus. He was especially thrilled to retrace the journeys of the apostle Paul on a cruise to the Holy Land and Greece. An avid fan of Will Rogers, Jim served as a “Roper” at the Will Rogers Memorial Museum for several years. He also enjoyed golf, attending the Masters and the Open in Scotland. Jim continued as an active dentist, retiring from private practice, but working for the Oklahoma Forensic Center in Vinita until he retired in 2017 at the age of 80. He was delighted when both of his children followed him into dentistry, each receiving their doctorate at his alma mater. Jim was preceded in death by his parents, Joe Willis Marshall and Juanetta Sanders Marshall Carter and his sister, Patti Marshall Eastland. Survivors include his wife, Mary Aleen Love Marshall; his children, Dr. Laura Marshall Willhoite and her husband Todd, of Claremore and Dr. William Walter Marshall, II and his wife, Avis, of Macon, Missouri; his beloved grandchildren, Sarah and Kelly Willhoite, Chase, Ian and Ella Marshall; his sister, Carol Jane Akin and her husband, Ray III; and nephews, Colin Eastland, Payt Akin and Dr. Joe Akin. Family graveside services are pending.
To order memorial trees or send flowers to the family in memory of James Willis Marshall, please visit our flower store.