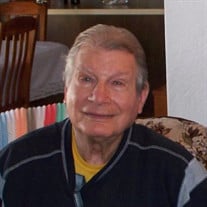 James Alva Meredith of Claremore, Oklahoma passed away on Sunday, January 23, 2022. After a month of declining health, James passed away one month after celebrating his 98th birthday.

James (Jim) was born in Claremore on December 23, 1923, to father, Rufus Davis Meredith and mother, Mary Smith. He graduated from Claremore High School in 1941 and then served
his country in WWII, first in the Coastal Artillery on our country’s west coast and then as a member of the 84th infantry division (RailSplitters) in France, Belgium, and Germany. Jim was also in the
Air Force reserve, serving until discharged in 1959.

At the end of the war, Jim returned to Oklahoma and used his G.I. benefits to attend Oklahoma A&M college where he graduated in 1949. Jim worked in his older brother’s restaurant in Waco, Texas before entering the finance and banking industry where he enjoyed over a 40-year career in Texas, at the Rogers County Bank in Claremore, Oklahoma, the First National Bank in Derby, Kansas, before retiring from the Independence State Bank in Independence, Kansas in 1988.

Along the way, he met bookkeeper E. Lucille Furnish of Miami, Oklahoma and were married on September 24, 1955. Jim and Lucille moved to Tulsa where they started their family with the birth of Linda Ann Meredith in 1956 and Ronald Bruce Meredith in 1958. Jim’s family lived in Pampa, Texas; Claremore, Oklahoma; Derby, Kansas; Independence, Kansas; Grand Lake Towne,
Oklahoma before coming home to Claremore in 1996.

Jim was preceded in death by his parents and by his sister Neva Barrett, his older brother Maurice Meredith, and his younger brother Col. John D. Meredith. Also preceded in death by his wife of 62 years Lucille Meredith. He is survived by his children Linda Ann Meredith of Claremore; Ron Meredith and his wife Jean of Wichita, Kansas; “adopted” son Alberto Anselmi and his wife Grazia
of Genoa, Italy and their children; his niece Michelle Meredith, nephew Michael Meredith (Heidi) and their family, all of Dallas; 4 grandchildren and 8 great grandchildren. He is also survived by the Furnish clan of nieces and nephews which include the Dembinski’s, King’s, Penrod’s, and Stephen’s families who he loved and enjoyed immensely.

A celebration of life will be held at MMS-Payne funeral home in Claremore on
June 4, 2022 at 11:00 am. In lieu of flowers, please donate to your local animal
shelter or veterans organization.
To order memorial trees or send flowers to the family in memory of James A. Meredith, please visit our flower store.