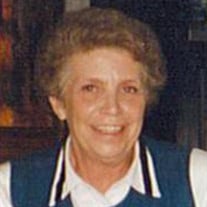 Service for Jeannette Burns will be 10:00a.m., Saturday, February 29, 2020 at MMS-Payne Funeral Home Chapel, burial will follow at Woodlawn Cemetery. Friends may visit at the funeral home on Friday, February 28 from 1pm-8pm, family will receive visitors from 6pm-8pm. Jeannette passed away on Wednesday, February 26, 2020. She was 76.

Born July 7, 1943 in Bixby, Oklahoma to Millard D. and Wilma Jean (Palmer) Ward, she attended schools in Tulsa, graduating from Central High School with the class of 1961. On September 14, 1962 she married Ronald G. Burns and together the raised 3 children. Claremore became home in 1967 and Jeannette worked for the Claremore Police Department. Her next employment was at American Airlines, where she worked as an account service representative. She retired from there in 1996.

Family was most important to Jeannette and she loved spending time with her children and grandchildren. She most enjoyed having the family at her house for Easter. She loved to read her Bible and attend church when she could.

Those family members that survive include her husband Ron; her daughter Stephanie Cobb and husband Clay and her son Mike Burns; her grandchildren Wade Cobb, Kelsey Mitchals, Whitney Rehburg, Westley Burns, Ashley Zinter, Amber O'dell, and Michael Lambert; her great grandchildren Braelyn, Jace, Grady, Brantly, Ladd, Rylan, Jackson, Liam, and Chloe; her brother Jim Ward. Jeanette was preceded in death by her parents and her son Gary Burns and her bother Dewayne Ward and a great granddaughter Isabell.
To order memorial trees or send flowers to the family in memory of Jeannette Burns, please visit our flower store.