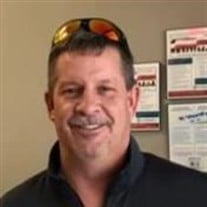 Jesse Beau Bryant was born in Denver, CO on December 25, 1968, and died on April 29, 2021, at the age of 52. His birth parents were Dick and Norman Jean(Ferguson)Bryant. His mother preceded him in death. Beau, as he was affectionately known, graduated in 1987 from Broken Arrow High School. He played on the BA Tigers Football team, and won several trophies in his long school career in Wrestling. He had one older brother Rick, sister Teresa, and a younger brother Jeremy. At the age of nine, his father remarried and added three more siblings to the family; one older brother, and two older sisters. They became known to their friends as the "Brady Bunch".
Beau was the always smiling, towhead, blond, blue-eyed kid that never met a stranger. He loved hunting and fishing, was an avid book reader, and a master at dirt bike riding. He also tried his love at bull riding, which unfortunately ended with a broken back. Needless to say, that ended his rodeo career, but never his love of the outdoors, being a hot-shot water skier, throwing a hook in the water, or hunting the best deer.
Beau signed up for the US Marine Corp, but it was short-lived due to health reasons. In 1993 he married Sherry Trett. They had one child, Jesse Chase Bryant. Beau was a long standing member of Bricklayers and Allied Craftworkers #5. He traveled as far as Africa, for he possessed a passion for laying bricks and a love for his brothers in the business.
Due to health complications, much of his latter adult life he held different jobs according to what his health would allow. Beau just finished a brick job for a friend, and a week later he was involved in a motor vehicle accident which took his life. Gone too soon!
He is survived by his beloved son, Chase and wife Courtney (Risenhoover) Bryant, and his new granddaughter Vivian, whom he never got to hold, but he called everyone with joy in his heart the night she was born. He is also survived by his parents, Dick and Theresa Bryant, and siblings, their families, many friends, and his guardian angels, Sherry and Tommy.
To order memorial trees or send flowers to the family in memory of Jesse Bryant, please visit our flower store.