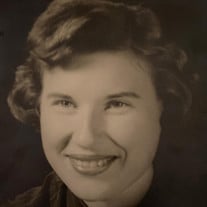 Jewel Eloise Grigg passed away peacefully in her home on December 1st, 2020. She was 91 years old.
Eloise was born to Van and Callie Murnan in Rogers County, Oklahoma, on February 10, 1929. She was raised in Chelsea and attended Chelsea Public Schools.
She met the love of her life, Ronal Grigg, in Chelsea, OK. The two married on March 3, 1951. They lived all over the country, but one of their favorite temporary homes was Tennessee. The couple settled down in 1980 and planted their roots in Chelsea, Oklahoma.
Eloise was a full-time stay at home mom and wife and exemplified the role and profession of homemaker. She enjoyed every minute of being with her family.
Eloise is preceded in death by her husband Ronal Grigg and daughter Linda Thornbrugh.
Survivors include Son Mike Grigg and his wife Billie Anne Grigg, Grandson Ian Grigg; Granddaughters Lily and Willow Grigg; Brother Larry Murnan; and Sister Betty Steinle. She will be deeply missed by her family and friends.
To order memorial trees or send flowers to the family in memory of Jewel Eloise Grigg, please visit our flower store.