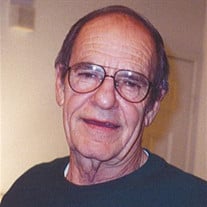 Joe Don Baird was born August 29, 1934 in Childress, Texas to Hugh and Nena Vance (Holton) Baird. Joe moved with his mother and step father to California at a young age. He returned to Childress when he was 12 and finished school there. He loved living with his grandparents and the horses, as well as working with Grandpa at his General Store! Following his high school graduation, Joe enlisted with the United States Air Force and proudly served his country, retiring after 20 years of service.

Returning to California Joe began working as an assistant director of a hospital. He later landed the job as the administrator of Riverside Community Hospital and worked there many years.

When Joe wasn't hard at work, he enjoyed taking care of his yard with his mini tractor. This reminded him of his time he spent with his grand parents, on their farm. He enjoyed visiting with his neighbors and walking his precious dog, Missy. Joe also loved his cat Sam.

Joe was preceded in death by his parents and a granddaughter, Jamie and two grandsons, Robert and Jake. He is survived by his wife Vicki; his sons Ron Baird, Pat Baird and Scott Baird and wife Jill; his brother Tom Fletcher and wife Judy and sister Gwen Navarro and husband Ed; Step daughter, Jennifer Brining, step son David Joyce and wife Michelle; his grandchildren Brion, Cory, Sean, Patricia, Robert, Kenneth, Christine and Chanel.
To order memorial trees or send flowers to the family in memory of Joe Don Baird, please visit our flower store.