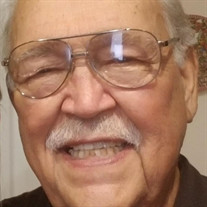 At the age of 85, Doctor John Martin Cegielski, Jr. of Verdigris, Oklahoma died on August 18th, 2020. John was the only child of immigrant parents John Martin Cegielski of Poland and Anna Pawlinszyn of Ukraine. He was born on August 7th, 1935 in Chicago, Illinois, where he graduated from St. Mel High School in 1952. He spoke fondly of his childhood in Chicago, often referencing his memories of riding rickety bikes through the city, hiding marbles in hollow spaces, and playing cards with gum wrappers. As a standout athlete, John was recruited by Coach Bernie Witucki to play both offensive and defensive tackle for the 1953 University of Tulsa football team. While playing football and pursuing his bachelor’s degree in chemical engineering, he was a roughneck in the oil fields of Oklahoma. Thankfully, he met his beautiful wife Carolyn Nicholson at a homecoming dance in the October of 1960, and they dated as he completed his master’s degree in chemical engineering with a focus on fluid motion at the University of Tulsa. They were married during the Thanksgiving weekend of 1961 at St. Peter and Paul Catholic Church in Tulsa and promptly moved to Los Angeles, where he worked for Mcdonnell Douglas as a space engineer, specifically working on MOL (manned orbiting laboratory) and the Thor missile. During their time in California, they started their family with John Martin III in ’62, Richard in ’64, Mary in ’66, and Caryn in ’70. After Mcdonnell Douglas cut their space program under the Nixon administration, John started a real estate company with an office in Canoga Park. Caryn was just three months old when John and Carolyn decided to move their family back to Carolyn’s childhood home in Van Buren, Arkansas. He served as the Facilities Director at Sparks Regional Hospital and the Director of the Van Buren Boys’ Club. His time in Van Buren was short lived, as he was awarded a grant to pursue his PhD in chemical engineering at the University of Wyoming soon after arriving in Arkansas. Carolyn managed their four kids in Van Buren, while John received his PhD in an impressive time of 18 months. They moved to Verdigris in 1974, and John served as the Director of Combustion System Division Research and Development for John Zink Company in Tulsa. He sold and designed the company’s first commercial rotary kiln incineration system, along with creating and patenting many other designs for the company. In the summer of 1975, John remodeled a 1923 farmhouse, the home where he lived with his family for the rest of his life. He loved managing the house, their acreage, and cattle over the years. Catherine was born in 1976, completing their family. In 1992, John became the Product Manager of Incineration Systems at Applied Thermal Systems, Inc. He then became the Manager of Incineration Systems at Zeeco, Inc. in 1993 and the President of Chemical Waste Inc. in 1995.
John was passionate about many things, but mostly his faith. He was a member of St. Cecilia Catholic Church in Claremore, Oklahoma. He taught religious education classes to youth and served as a Eucharistic Minister, RCIA instructor, sponsor to those inquiring about Catholicism, and an active member of the Knights of Columbus. John was outspoken, as he wrote social and scientific opinions, and he never missed an opportunity to share those opinions. The way in which John engaged with the world and society with such intense care was admirable; he always strived to have his voice heard. He did so by writing letters, including recipients such as politicians, the pope, and heads of corporations. With his specialization in fluid motion, he was especially critical of the environmental industry and quite qualified to be. Rumor has it that he’s infamous in the mail room at the Oklahoma Senate Office. He valued transparency and truth, and, as his family can attest, he never subdued himself when trying to make the world a better place.
He will be deeply missed and survived by his wife, Carolyn Sue Nicholson of 58 years and his five children: John Cegielski (Rhonda) of Verdigris, OK and their children Kristyn (Karlos) Arcos and daughter, Isabella (10/20), John IV (Sarah, fiancé), Matthew (Sidney) and son Elliot; Richard (Ania) of Claremore, OK and their children Adam and Sophia; Mary (Tim) Whelan of Tulsa, OK and their children John, Christopher, and Elizabeth; Caryn (Greg) Murray of Pittsburg, KS and their daughter Allyn; Catherine (Michael) Haney of Rigby, ID and their children Calyn, Nathan, Claire, and Ameilia; and many nieces and nephews.
To order memorial trees or send flowers to the family in memory of Doctor John Martin Cegielski Jr., please visit our flower store.