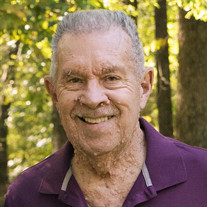 Service for Jonnie Lee Riddle will be 2:00 p.m., Thursday, September 12, 2019 at MMS-Payne Funeral Home Chapel; burial will follow at Oak Hill Cemetery, Oologah.Friends may visit at the funeral home on Wednesday, September 11 from 1pm-8pm, with family receiving visitors from 6pm-8pm. Jonnie passed away on Friday, September 6, 2019. He was 80.

Born on April 14, 1939 in Tulsa, Oklahoma to Arley Doyle and Golda Irene (Schmidley) Riddle, Jonnie received his education in Berryhill, graduating with the class of 1957. He worked for a time with Western Supply before continuing with his studies at Northeastern State College in Tahlequah.

After graduating with a teaching degree, Jonnie began teaching in New Mexico for one year, and then Colorado for two years. He returned to Oklahoma and began teaching in Oologah while completing his Master's Degree in Industrial Arts. While teaching he also worked for Phillips 66 part-time. He retired in 1999 from teaching with a 33-year career. Not one to stay idle, Jonnie began working as a greeter at Wal-Mart and driving a bus for Northeast Tech. He continued driving for Northeast Tech until February 2019.

Jonnie’s first priority was his loving wife and family. He provided well for them and ensured they had all they needed. His spare time was spent with his family. Jonnie never met a stranger, and made friends easily. He loved kids and was so patient with them. He was a collector of pens, calendars, coffee cups, and any free memorabilia. His love for his country was second to none. He avidly showed support for service men and women and was very proud of his sons’ service to their country.

Those family members that preceded Jonnie in death include his parents Arley and Golda; and his brother Jerry Riddle. He is survived by his wife Jolene Riddle of their home; his children Jon Douglas Riddle and wife Pamela, Robert Dustin Riddle, and Deborah Mackey and husband Robert, all of Claremore; his grandchildren Mika Riddle, Kendall Mackey, Ashley Martin, and James Lay; his great-grandchildren Preslie Riddle, James Volbrecht, and Holly Jones; his sister-in-law Paula Riddle; and many nieces and nephews.

Memorial contributions may be made to the Blue Star Mothers Chapter 20, PO Box 14, Claremore, Oklahoma 74018.
To order memorial trees or send flowers to the family in memory of Jonnie Lee Riddle, please visit our flower store.