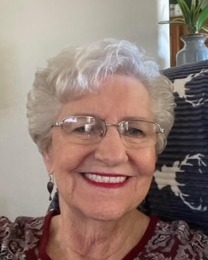 Memorial service for June Morose will be Tuesday, December 20, 2022, at 11:00am at MMS-Payne Funeral Home Chapel in Claremore. Visitation will be on Monday, December 19, 2022, from 6pm-8pm at the funeral home.

The daughter of Harold and Carolyn (Young) Mullins was born in Frederick, OK on July 10, 1944.  As a young girl June and her family would move to Tulsa.  There she would attend a local elementary before going to Nathan Hale High School.   During her time there she enjoyed participating as a cheerleader and was also on the committee that helped choose the Ranger mascot.  She would graduate as a member of the class of 1962.  It was also around this time, while washing her car, that a young Dahl Morose pulled into her drive on his motorcycle.  The two struck up a conversation and shortly began dating.  They would marry on October 15, 1961, in Tulsa. The newlywed couple would live in Tulsa and begin raising their family.  In 1970 June and Dahl decide to relocate and moved to Claremore.  The next several years found June mainly taking care of her family.  However, when June decided to go to work, she hit the road running.   She became quite the entrepreneur.  She started sewing prize saddle blankets for winning show horses.  After several years of that she decided to jump into the food and retail business.  Owning the Mexican Chef restaurant in Claremore, as well as other restaurants in Inola and Chelsea.  A few of her other notable endeavors included the Paradise Pantry, Bell, Book and Candle Store and the Pink House.  June and Dahl also had their own hot shot delivery service and she also worked as a real estate agent.

As busy as June stayed, she did have a few hobbies.  She loved flowers and cooking.  Recently even tried to make her own cooking videos.  When she did find time to relax, she enjoyed lunch with her old classmates, and watching her favorite football team the Dallas Cowboys.  However, nothing brought her as much enjoyment as her children and grandchildren.

She is preceded in death by her parents, Harold Mullins and Carolyn and Reese Finkler.

To order memorial trees or send flowers to the family in memory of June Morose, please visit our flower store.