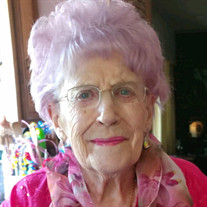 Kathleen Marie Trout, 93, died suddenly May 15, 2019. All that knew her will have fond memories forever.
Katie’s kitchen was an amazing place where she not only prepared but taught as well. She baked from scratch and was famous for her pies (she squeezed lemons for her lemon meringue). She could finish a pie from scratch before anybody else could make a pie from a mix. Family dinners were filled with laughter and so much great food that everyone was always more than satisfied.
Her sewing room was just as remarkable. Fabrics were Katie’s canvas. She could design and create anything, including clothing for the family, costumes, needlework, and crochet. A member of the Quilt Guild, Katie produced more than 87 quilts that she shared with her family and others.
Always caring, always planning fun, this amazing wife, mother, grandmother, and great-grandmother was a delight to all who met her.
She was born Kathleen Marie Douglas on January 23, 1926, in Niagara Falls, N.Y., to Leon Arthur Douglas (“Pum”) of Buffalo, N.Y., and Amy Cecil Howse, of Humberstone, Ontario, Canada. Both Leon and Amy were descendants of American Loyalists, and as such they and all their descendants in perpetuity carry the British Royal Title of “U.E.,” for Unity of Empire. The family sometimes laughs that the title “isn’t worth anything, but we have it anyway.”
Katie was the third of five children, born after Thelma and Dick, and followed by Dorothy and Nancy. She attended public schools in Niagara Falls and graduated from Niagara Falls High School in 1944. As Leon worked for the New York Central Railroad for more than 44 years, the Douglas family frequently rode trains for free.
After high school Katie took the train to New York City where she enrolled in the Traphagen School of Fashion. During the housing shortage of World War II, Katie lived with half a dozen other girls in a tiny apartment owned by Traphagen.
One night in early May of 1945 she was riding the Staten Island Ferry as it passed the Statue of Liberty, which had been kept dark for years in fear of German air attack. Suddenly all the lights came on, illuminating Lady Liberty in all her glory. The stunned passengers quickly realized that Germany must have surrendered. They all stood and sang “God Bless America,” which was followed by “God Save the King,” sung by British soldiers also riding the ferry.
A few weeks later Katie was taking a walk on a pleasant spring day and heard a strange buzzing sound. The noise was coming from the Hudson River docks, and as she walked that way it got louder and louder. She then saw a huge troop ship pulling into the docks, its decks packed with returning U.S. soldiers, all cheering at the top of their lungs.
After graduating from Traphagen, Katie briefly worked for various fashion-related firms, including Singer Sewing Machines. She then moved to Phoenix, Arizona, to live with her Aunt Gladys. One day she and some girlfriends were walking downtown when they noticed some U.S. Army pilots inside a luncheonette called The Bacon Grill. One girl owed a nickel to one of the pilots, so the girls entered.
Katie had met pilots before, and while she felt most of them were egotistical and took their officer ranks far too seriously, one of the pilots was down-to-earth, friendly, and pleasant. His name was Ralph E. Trout, of Oklahoma.
A month later they were engaged, and soon were married on May 18, 1946. Ralph left the Army Air Forces that October, and the couple moved to Tulsa, where he graduated from the Spartan School of Aeronautics, then went to work for American Airlines.
Katie and Ralph raised four children, and Ralph’s airline job allowed the family many enjoyable journeys. They spent summers at their Adirondack cottage in New York, where Katie’s cooking and sewing skills impressed the upstate New Yorkers.
In 1978, the family moved from Tulsa to their retirement home in Oowala, north of Claremore, the “Circle T,” which Ralph designed and Katie decorated. Katie was active in Extension Homemakers and TOPS, and was a lifetime member of the Country Fare Quilters Guild.
Katie is survived by her four children: Michael Trout and wife Luann of Selkirk, N.Y.; Carrie Sloan and husband Jeff of Claremore; Philip Trout of Muskogee; and Heidi Mozingo of Lee’s Summit, Mo. She is also survived by 11 grandchildren (who called her “Mimi”), 23 great-grandchildren, and one great-great-grandchild, as well as her sister Nancy of Plattsburgh, N.Y. She was predeceased by Ralph, her beloved husband of 62 years.
Visitation will be between 1:00 and 8:00 on Tuesday, May 21, at MMS-Payne Funeral Home at 102 W. 5th Street, Claremore, Okla. 74017, where the family will greet friends for the final two hours of visitation. Graveside services will be at 10:00 on Wednesday, May 22, at Oowala Cemetery at E. 430 Road and S. 4150 Road north of Claremore. Contributions in Katie’s memory may be made to to the Children’s School of Hope, Children’s Shelter of Cebu, Cebu City, Philippines, where Ralph’s youngest granddaughter, Deborah Trout of Selkirk, was adopted. Children’s Shelter of Cebu, P.O. Box 247, Cambridge MN 55008-9904.
To order memorial trees or send flowers to the family in memory of Kathleen Marie Trout, please visit our flower store.