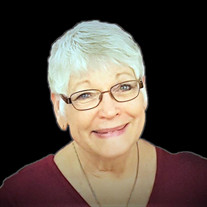 Funeral service for Kathy Doss will be held on Wednesday, August 24, 2022 at the Calvary Baptist Church in Inola, OK. Burial will follow at Highland Cemetery in Inola. Visitation will be held on Tuesday, August 23, 2022 at the Inola Funeral Home from 1-8 p.m. with family greeting friends from 5-8.
Kathy Lynn Doss passed away on Thursday, August 18th, 2022, at the age of 75 at her home in Inola, OK.
She was born October 19, 1946 in El Paso, Texas to Homer and Bea (Kincheloe) Garrison. Shortly after Kathy was born the family moved to The Village just outside of Oklahoma City, OK where she spent her childhood years. In high school, Kathy loved to sing and perform musicals and was active in the choir at the Methodist church and her high school chorus. She also worked for her father’s Commercial Union Insurance Company. Kathy graduated from John Marshall High in 1964. She continued her education at Central State College in Edmond, OK where she pursued a degree in Elementary Education. It was here she was able to continue to foster her love for musicals as well as study teaching.
It was during this time that she met Bill Zingg and the two began dating. Kathy moved to Tulsa with her parents where she began working in the oil and gas industry while Bill served in the US military in Vietnam. The couple married on December 17, 1966 and spent the next 25 years together. After a short stay in Las Vegas, NV they made their home in Tulsa, OK where Kathy would raise her 3 daughters: Erika, Jessika, and Tori from 1971 to 1992.
Kathy was a stay-at-home mother so she could focus on her daughters and be involved in all their activities. Kathy taught childbirth classes in her home in the evenings in connection with the CEA, which later evolved into a career at Oklahoma Osteopathic Hospital. Kathy was passionate about making sure women and children were cared for and informed throughout the childbirth process and helped to write brochures and other informative documents about breastfeeding and childbirth. Kathy took pride in being a pioneer and advocate in childbirth education for over 20 years.
Kathy also worked with her sister, Beverly, as an officer manager at Inter Data Systems, Inc. and later as a medical recruiter for Management Recruiter in Tulsa, OK; as a financial counselor with PacifiCare of Oklahoma; and in the business office at Hillcrest Hospital in Claremore, OK. She worked most recently as a Financial Counselor for Cancer Care Associates in Tulsa, OK where she retired in 2013. Kathy had a passion for helping people and skillfully applied her combined knowledge of business, education, and homemaking to touch the lives of countless families.
Kathy loved to dance. It was while attending country dance lessons at Chisolm’s with the Singles Class from the Methodist church that she met Jim Doss. They would begin dating and eventually married on May 27, 2000. It was at this time Kathy welcomed the addition of two stepsons: Brad and Scott. The couple made their home in Inola, OK and Kathy went from being a city girl to embracing the country lifestyle completely, but she never gave up her high heels!
In her spare time Kathy enjoyed many hobbies including hunting, fishing, dancing, and traveling on the Goldwing motorcycle with her husband. She loved to cook and prepare big meals for her family, especially around the holidays. She was an amazing seamstress and very creative, making all the bridesmaids dresses and flower arrangements for her daughter’s weddings. She also had a knack for shopping and the family has affectionately given her the title of “Professional Shoe Shopper.” However, this one thing is for sure, her greatest joy was being “GiGi” to her grandchildren, spending time with them, supporting their many events and varied activities, and rooting for each one of them with great pride.
She is preceded in death by her parents, Homer and Bea Garrison Normann, and sister, Beverly Swofford.
Survivors include her husband Jim, of the home; daughters, Erika Dugan and husband Marc, Jessika Paslay and husband Clayton, Tori Schockemoehl and husband Scott, Brad Doss and wife Erin and Scott Doss and wife Whitley; Grandchildren, Hailey Grippen and husband Wesley, Carlin Dugan, Felicity Dugan; Caleb Paslay and wife Britley, Josh Paslay and wife Nichole, Zachary Paslay, and Hannah Paslay; Paige, Tyler, and Sara Schockemoehl; Ainsley, Hudson, and June Doss; great-granchildren, Eli and Renly; mother-in-law, Louise Doss and sister-in-law, Eloise Keeter and husband Bobby along with many other extended family and friends.
To order memorial trees or send flowers to the family in memory of Kathy Lynn Doss, please visit our flower store.