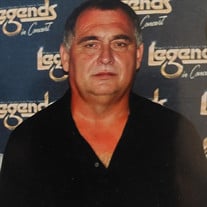 Kenneth Gene Steele passed away on September 19th, 2022 he was 62 years old. Kenneth was born in Searcy, Arkansas. he grew up and attended school at Bald Knob Public Schools and graduated with the class of 1978. After his high school years he attended college at ASUBB. He later worked for the Land O' Frost meat company for a couple years then made a career at the USDA as an Inspector for 34 years.
Kenneth met the love of his life at OK Foods and married on March 24, 1989 and settled down in Fort Smith, AR. They later made their final home in Claremore, Ok in 2000.
Kenneth's first love was trapping for furs with his dad and brother, he also enjoyed hunting and fishing, and going to concerts with his family. His favorite type of music was classic rock, some of his favorite bands were Styx, Journey, John Fogerty. In his later years he became a fan of Katy Perry. Kenneth also enjoyed going to the beach with his family. Some of his favorite places to go was Galveston, TX and Florida.
He is preceded in death by his father Harold Gene Steele.
Kenneth is survived by his wife Rita Steele; Daughters, Rachel Steele, Layla Steele; Sons, Anthony Tran, Justus Steele; Mother, Nora Steele and brother Mark Steele and wife Lydia.

In lieu of flowers the family has asked for donations to be made to the CJD foundation
https://cjdfoundation.org/donate .
To order memorial trees or send flowers to the family in memory of Kenneth Gene Steele, please visit our flower store.