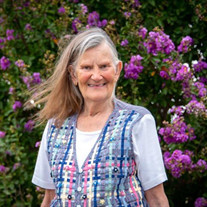 Funeral service for Ora Stewart will be held at 11:00, Friday, October 15th, at the First Baptist Church in Inola. Burial will follow at Eastview Memorial Cemetery in Vernon, Texas at 11:00 a.m. on Saturday, October 16, 2021. The family asks that you consider making a donation to the Alzheimer’s Association (alz.org) in lieu of flowers, and out of respect for the safety of our elderly, to please consider wearing a mask if attending the service.
Ora LaDean (Read) Stewart, LaDean as most everyone knew her, of Inola, Oklahoma died Sunday evening, October 10, 2021 at Cearu Medical Resort in Tulsa. She was only a few days shy of turning 88. Throughout her journey and struggles with Alzheimer’s up until the time she passed, she was continually surrounded by so many family and caregivers, whom she loved so dearly, and who loved her most dearly.
The daughter of Charles and June Read, she was born October 15, 1933, in Rocky, Oklahoma. There she was raised and attended school nearby in Sentinel. LaDean met Bill, her future husband, from Vernon, TX, and it was love at first sight. Within weeks, they were wedded, March 21st, 1951 there in Vernon. Shortly after their marriage, they moved to Newark, Ohio for a while where her husband Bill was drafted into the Korean War, serving in occupational forces Germany, and where she would eventually join him. After returning from Germany and then living in Ohio and Texas, LaDean and her family eventually settled in Oklahoma, first in Tulsa, then Inola for the remainder of their years. Bill and LaDean remained soulmates for an amazing 63 Years until his passing in 2014.
In her leisure time, she served others with never-ending compassion. She absolutely loved children, nature and all animals, particularly cats, dogs and any other wild animals that would come around the home! Gardening was one of her favorite delights and she enjoyed sharing flowers, fruits and vegetables with everyone. She was very active in the First Baptist Church of Inola, where she worked in the nursery for literally decades. Her love for children was as beautiful as it was obvious; everyone saw it, and everyone felt it!
She is preceded in death by her husband, Bill and her dear parents, Charles (Chuck) and June Read. She was an only child and with her aunts and uncle now passed, her survivors consist of her five children; Larry Stewart of Noble, OK, Rita and Paul Alemore of Inola, OK, Laura and Bryan Green of Glenpool, OK, Bill Jr. and Tomoko Stewart of Seabeck, WA, and Rhonda and Rusty Chevalier of Skiatook, OK, 15 grandchildren, 27 great-grandchildren and two great-great grandchildren. She was loved by all and will be forever missed.
View and sign Ora's online memorial at www.mmsfuneralhomes.com
To order memorial trees or send flowers to the family in memory of LaDean Stewart, please visit our flower store.