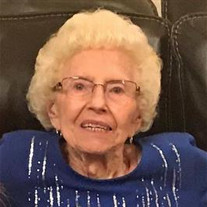 Service for Lelia Mae Humphrey will be 10:00 a.m., Wednesday, April 3, 2019 at MMS-Payne Funeral Home Chapel; burial will follow at Ridgelawn Cemetery in Collinsville.  Friends may visit at the funeral home on Tuesday, April 2 from 1pm-8pm, with family receiving visitors from 6pm-8pm. Leila Passed away on Friday, March 29, 2019.  She was 94.
Born May 14, 1924 in Cleveland, Oklahoma to William Scott and Zula (Miller) Bloomer, Lelia attended school in Cleveland and graduated with the class of 1942. She continued her studies at Draughn’s business school in Tulsa. Leila worked at McDonnell Douglas for a time, where she was considered a Rosie the Riveter.  While working there, she met her future husband, Ted. He had to work really hard at making her notice him, and finally, after many tries, he won her over. On April 24, 1948, Lelia married Teddy Wayne Humphrey and they began their lives together.
Claremore was their home, and Lelia was not only a wonderful wife and mother, she had a career with the Rogers County Treasurer's Office as Head Deputy, retiring in 1986. The position of wife and mother was taken very seriously, and she did it well. Her family was top priority, and she made sure they had everything they needed.  She kept them organized and took excellent care of them. When Lelia wasn't at work she enjoyed being outside tending to her flowers. She also was an avid reader and enjoyed a good book. Her favorite time was when she was with her family. Her grandchildren were her pride and joy. She attended all the activities she could when it came to them. A Godly woman, Lelia instilled in her family the importance of her Christianity and shared her heart with them.
Those family members that survive include her daughter Sharon Malcom and husband Ron, daughter-in-law Linda Hayes and husband Dale; her grandchildren Kirby Bickel and wife Jennifer, Kerry Malcom and wife Sarah, and Riley Malcom, Teresa Cunningham and husband Daniel, Alisha Humphrey; her great- grandchildren Kaleb, Karson, and Kaylee Bickel, Issac, Elizabeth, and Samuel Malcom, Hannah, Jacob, Caleb, Rachel, Isaac, and Zach McCormick; her nieces Pam Adams and husband Mike, and Linda Nunamaker and husband Jim.
She was preceded in death by her parents, husband Ted Humphrey, brother Alfred Bloomer, and step-son Jerry Humphrey.
View and sign Lelia's online tribute at www.mmsfuneralhomes.com .
To order memorial trees or send flowers to the family in memory of Lelia Mae Humphrey, please visit our flower store.